The Whites Only House Fires the Black Usher – Is the Chumph Purging Black Employees?

The House is “Whites Only” after all!

More than likely, the Chumph couldn’t tolerate the idea f a female, much less black manager.

Perhaps Sessions complained about seeing a black woman in a position of authority?

The White House confirmed to The Washington Post earlier Friday that Angella Reid was fired. Reid was the first woman and second African-American to serve in that role.

“She is no longer employed here at the White House. But we left on very good terms and wish her the very best and certainly hope for great things for her in the future,” Huckabee Sanders told reporters Friday in her first on-camera briefing.

The Post noted that the White House usher oversees all activities in the residence, working as the dwelling’s general manager. Reid joined the White House in 2011 during former President Barack Obama’s administration, replacing Stephen Rochon, who was the White House’s first African-American usher.

“It’s not uncommon that you might have a transition of staff when a new administration comes in, and it’s simply nothing more than that,” Huckabee Sanders said, reiterating that “we certainly wish her again the very best.”

Huckabee Sanders said the deputy usher will replace Reid in an acting capacity “for right now.”

Posted by btx3 on May 5, 2017 in Daily Chump Disasters, The Definition of Racism, The New Jim Crow

Is this woman really that hard up for a man?

A black Rhode Island woman endured an abusive, racist rant by her white boyfriend during a fight. In a recording, her then-boyfriend, who appears to be a fan of Donald Trump, berates her about the Black Lives Matter movement, complete with multiple n-words and a policy suggestion for Donald Trump.

“You know what? The second he’s elected, that’s what Trump should do,” he says. “Give all you mother fuckers your tickets back. You don’t like it? Peace!”

Somehow achieving the superhuman feat of maintaining her composure, she asks, “You do realize you sound like a racist, right?”

“I don’t care. You wanna know why? Cause I’m not up there saying white lives matter, white lives come to the front, black lives go to the back, I’m just like, “Hey, what’s up? How you doing?”

He then proceeds to pantomime how he imagines BLM protestors talk, and concludes with, “Fuck your black ass, get the fuck out.”

“Get out of my country, you’re causing the fucking problem. Bye!” he says.

Posted by btx3 on November 15, 2016 in The Definition of Racism, The Post-Racial Life, Women

Meet the newest Marvel character – IronHeart. She is scheduled to replace Iron Man. 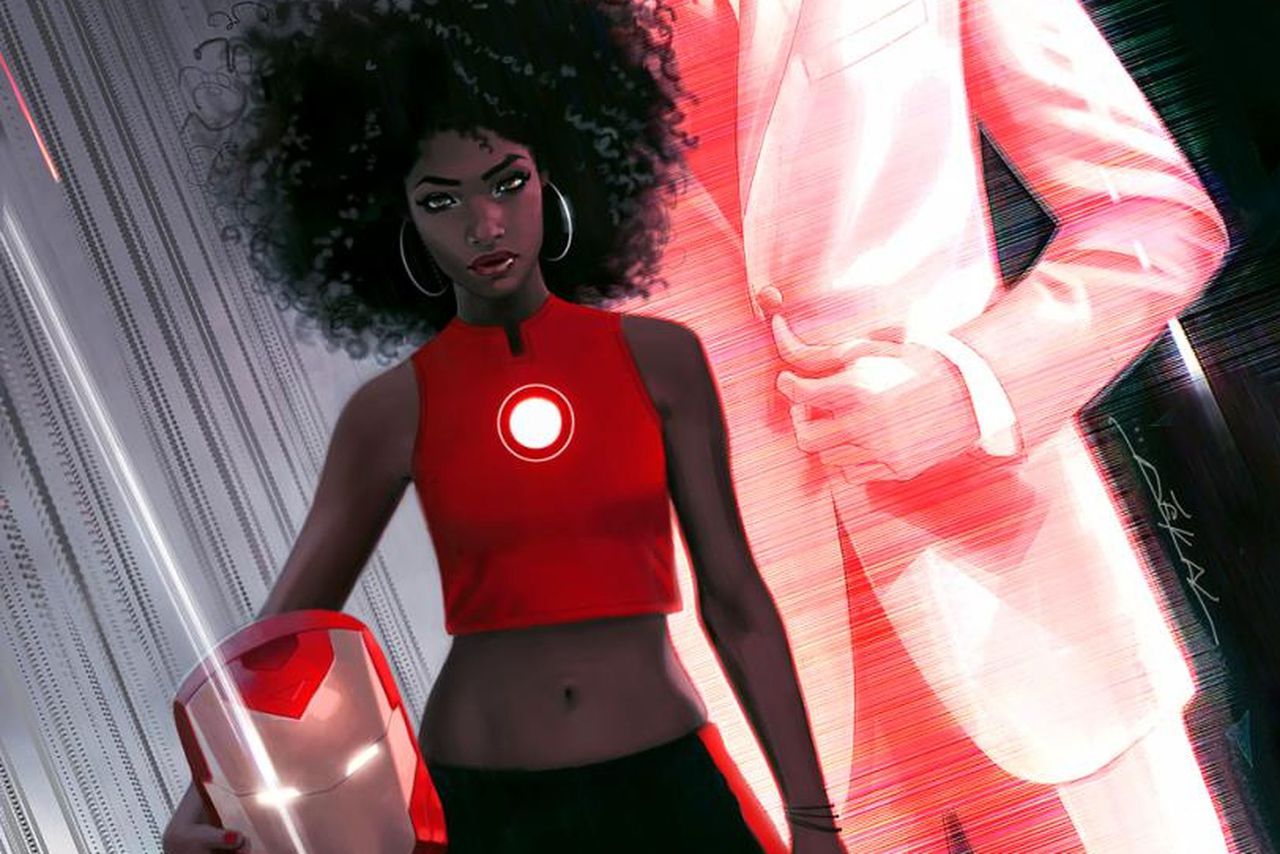 Last month, Marvel revealed that Tony Stark would be passing on the Iron Man mantle to Riri Williams — a 15-year-old genius and the first young black woman to wear the famous armor. As we suspected at the time, Williams won’t be keeping the Iron Man name, and now, as reported by Wired, we know her chosen moniker: Ironheart.

Williams was first introduced to Marvel readers in Invincible Iron Man #9 back in May, when she creates her own Iron Man suit in her dorm room at MIT and gets kicked out of school for her trouble. Wired reports that Williams will get a proper introduction with the first issue of the next Invincible Iron Man volume coming out this fall, with Stark officially endorsing her new superhero role.

Yeah…There are a few of us in Sweden. This courageous woman being an example for the rest of us, worldwide. The Nazi types in Europe are just as violent and nasty as their German forbears. 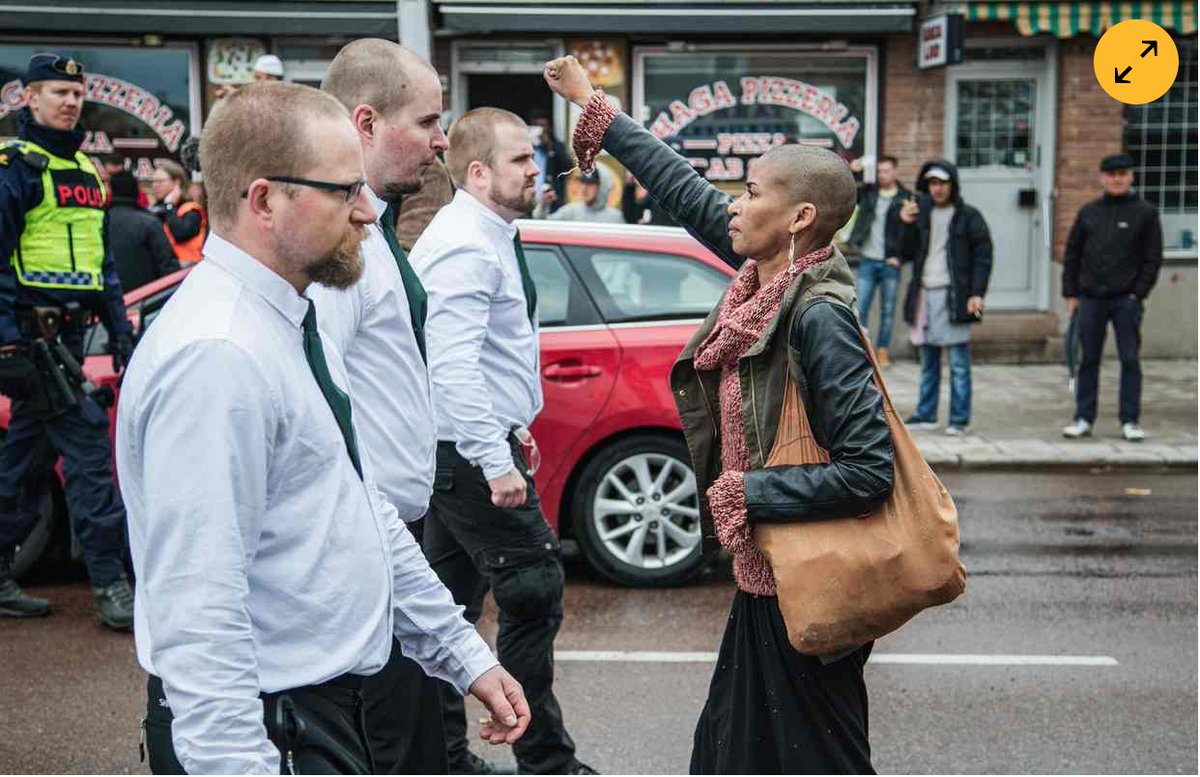 All it takes is one brave soul to stand up against hate.

An image going viral around the world shows 42-year-old Tess Asplund standing defiant, with a fist raised, against hundreds of neo-Nazis marching through the streets of Borlänge, Sweden, on Sunday.

“It was an impulse. I was so angry, I just went out into the street,” Asplund told the Guardian. “I was thinking: ‘hell no, they can’t march here!’ I had this adrenaline. No Nazi is going to march here, it’s not okay.”

The paper reported that Asplund stands just 5’2” and weighs about 110 pounds — yet she stood in the path of some 300 marching neo-Nazis, one of whom shoved her out of the way.

She’s being praised across social media for her courage.

Posted by btx3 on May 6, 2016 in International Terrorism

Hey! Want to be on National TV?

Easiest photobomb in the world is for a black person to show up at a Republican candidate’s speech. They put every one of the half dozen or so which show up at the major rallys in seats behind the candidate to be “visible” as supporters.

This woman objected to being used as a black prop.

An Illinois woman became an Internet celebrity after she read a book during a campaign speech by Donald Trump.

Johari Osayi Idusuyi, a student at Lincoln Land Community College in Springfield, said she brought a copy of “Citizen,” an award-winning book on everyday racism by Claudia Rankine, to a rally near her home, reported WICS-TV.

“I’m genuinely not interested in him as a person, but if you have the chance to see a presidential candidate, why not?” Idusuyi said.

She and some friends ended up with a spot directly behind the Republican candidate after seeing an open seat and being invited into the VIP section by a campaign staffer.

“I think we were chosen for obvious reasons,” Idusuyi told Jezebel. “We are minorities and there weren’t a lot of minorities there. He also instructed us to sit in the middle, so we kind of already knew what this was.”

Idusuyi insisted she went into the rally with an open mind, but she took out her book and began reading after Trump demanded the removal of some protesters, and she said supporters cheered after a supporter removed a woman’s Obama hat and tossed it into the crowd.

“I thought, ‘That’s bullying, that’s aggressive,’” she said. “I don’t think Trump handled it with grace. I thought, ‘Oh, you’re really not empathetic at all.’ That’s when the shift happened.”

She decided to take out her book and read it conspicuously, realizing she was on camera behind Trump.

“Why not use the opportunity to promote a great book?” Idusuyi said. “I didn’t expect to get in an argument with the people behind me.”

Idusuyi gained online notoriety after video showed a white man sitting near her tapping her on the shoulder and angrily telling her to put away her book.

She can be seen telling the man to leave her alone, and she puts the book back in front of her face and resumes reading.

“The man, he was mad but not as mad as his, maybe, spouse,” Idusuyi said. “He had a more calm demeanor, just like, if you don’t want to be here, leave.”

She said the woman wouldn’t let it go.

“The woman kept saying, ‘If you don’t want to be here then leave. You didn’t even stand for the Pledge of Allegiance,’” Idusuyi said. “I said, ‘I do want to be here, that’s why I’m here. You don’t know who I am. I’m reading my book because I’m uninterested. Did you not just see what happened? This person disrespects women, minorities, everybody and you’re still supporting him. He’s not saying anything of substance.’”

She said the couple seemed like nice enough people, but she didn’t appreciate the way they treated her.

“I don’t think they have any right to tell me what to do,” Idusuyi said. “The lady, actually, she mumbled something. I didn’t hear but my friend told me the next day that she said, ‘I’m so glad you’re not my daughter,’ or something along those lines — and I was thinking, ‘I’m glad I’m not your daughter either!’”

She said Trump had not won her vote.

“I came here, yes, to observe a man that I already had low expectations for, but I thought maybe he could change my mind,” Idusuyi said. “Maybe it was just a media thing, and I’m judging too fast based on what the media says, and I was wrong — (but) I wasn’t. He was exactly what I expected him to be and his supporters are exactly what I expected them to be.”

Another sickening attack on a woman, sitting with her 4 children in an Applebee’s in Wisconsin… Another Trump supporter undoubtedly was the perpetrator of this violent attack for no reason.

This is what happens when politicians use the news, and the news itself stirs up hate.

Asma Mohamed Jama before and after attack

She says she was speaking to a relative in Swahili when a stranger smashed a beer mug in her face.

A woman who was attacked by another woman in a suburban Minneapolis restaurant, allegedly because she was speaking a foreign language, said she feels traumatized and may move out of Minnesota.

Asma Jama told Minnesota Public Radio News (http://bit.ly/1S7gWxE ) that she was chatting with her family in Swahili, one of three languages she speaks, at an Applebee’s in Coon Rapids on Oct. 30 when a woman in a nearby booth smashed a beer mug in her face. The attack left cuts on her face and a deep gash on her lip that required stiches.

The woman accused in the attack, Jodie Burchard-Risch, was arrested shortly after the incident and charged with third-degree assault. The Minnesota chapter of the Council on American-Islamic Relations has called for hate crime charges.

A criminal complaint alleges that Burchard-Risch was upset that the victim was speaking in a foreign language and yelled at her, then refused to leave when restaurant managers tried to intervene. Burchard-Risch continued to yell and threw a drink on the victim, then smashed a beer mug in her face before fleeing, according to the complaint.

No working phone numbers for Burchard-Risch could be found Saturday by The Associated Press. Burchard-Risch is scheduled to return to court on Dec. 7. It wasn’t immediately known if she had an attorney.

Jama said she feels “traumatized” and doesn’t feel safe leaving her house alone. When she needed to have the 17 stitches removed from her lip on Thursday, she asked her cousin to join her.

“I’m actually thinking about moving out of Minnesota,” she said. “I’m scared for my life. I don’t feel comfortable here anymore.”

Posted by btx3 on November 8, 2015 in Domestic terrorism, The Definition of Racism