Facebook ha supposedly been trying to clean up its act after becoming a recruiting zone for white nationalists and Nazis.

Like all tech companies it tried a technical solution. Unfortunately and in a long running spate of absolute blindness…Nobody at Facebook bothered to look at  the motivations of the software creators and moderators. The company’s employee demographics look like this – 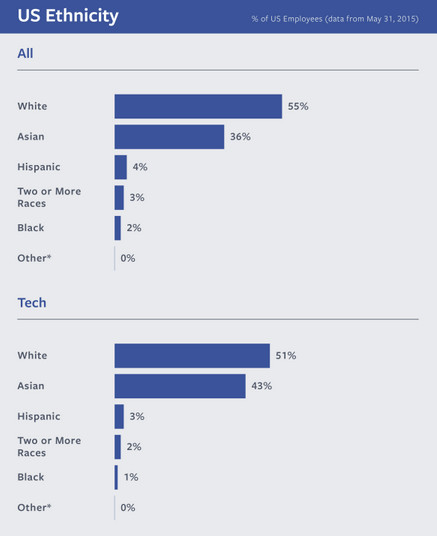 The company has no context of what is going on outside there in the real world – so the issues with “banning” Minority posters while allowing Nazi/KKK/white supremacist ones to continue to spew vile messages isn’t really surprising.

Jint to Zuckerberg – If you want to get real about this, move this portion of your company operations to the East Coast, where you can actually recruit some folks of color.

A white man called her kids the n-word. Facebook stopped her from sharing it. Being put in “Facebook jail” has become a regular occurrence for San Diego photographer Shannon Hall-Bulzone.

Francie Latour was picking out produce in a suburban Boston grocery store when a white man leaned toward her two young sons and, just loudly enough for the boys to hear, unleashed a profanity-laced racist epithet.

Reeling, Latour, who is black, turned to Facebook to vent, in a post that was explicit about the hateful words hurled at her 8- and 12-year-olds on a Sunday evening in July.

“I couldn’t tolerate just sitting with it and being silent,” Latour said in an interview. “I felt like I was going to jump out of my skin, like my kids’ innocence was stolen in the blink of an eye.”

But within 20 minutes, Facebook deleted her post, sending Latour a cursory message that her content had violated company standards. Only two friends had gotten the chance to voice their disbelief and outrage.

Experiences like Latour’s exemplify the challenges Facebook chief executive Mark Zuckerberg confronts as he tries to rebrand his company as a safe space for community, expanding on its earlier goal of connecting friends and family.

But in making decisions about the limits of free speech, Facebook often fails the racial, religious and sexual minorities Zuckerberg says he wants to protect.

The 13-year-old social network is wrestling with the hardest questions it has ever faced as the de facto arbiter of speech for the third of the world’s population that now logs on each month.

In February, amid mounting concerns over Facebook’s role in the spread of violent live videos and fake news, Zuckerberg said the platform had a responsibility to “mitigate the bad” effects of the service in a more dangerous and divisive political era. In June, he officially changed Facebook’s mission from connecting the world to community-building.

The company says it now ­deletes about 288,000 hate-speech posts a month.

But activists say that Facebook’s censorship standards are so unclear and biased that it is impossible to know what one can or cannot say.

The result: Minority groups say they are disproportionately censored when they use the ­social-media platform to call out racism or start dialogues. In the case of Latour and her family, she was simply repeating what the man who verbally assaulted her children said: “What the f— is up with those f—ing n—-r heads?”

Compounding their pain, Facebook will often go from censoring posts to locking users out of their accounts for 24 hours or more, without explanation — a punishment known among activists as “Facebook jail.”

“In the era of mass incarceration, you come into this digital space — this one space that seems safe — and then you get attacked by the trolls and put in Facebook jail,” said Stacey Patton, a journalism professor at Morgan State University, a historically black university in Baltimore. “It totally contradicts Mr. Zuckerberg’s mission to create a public square.”

In June, the company said that nearly 2 billion people now log onto Facebook each month. With the company’s dramatic growth comes the challenge of maintaining internally consistent standards as its content moderators are faced with a growing number of judgment calls.

“Facebook is regulating more human speech than any government does now or ever has,” said Susan Benesch, director of the Dangerous Speech Project, a nonprofit group that researches the intersection of harmful online content and free speech. “They are like a de facto body of law, yet that law is a secret.”

The company recently admitted, in a blog post, that “too often we get it wrong,” particularly in cases when people are using certain terms to describe hateful experiences that happened to them. The company has promised to hire 3,000 more content moderators before the year’s end, bringing the total to 7,500, and is looking to improve the software it uses to flag hate speech, a spokeswoman said.

“We know this is a problem,” said Facebook spokeswoman ­Ruchika Budhraja, adding that the company has been meeting with community activists for several years. “We’re working on evolving not just our policies but our tools. We are listening.”

Two weeks after Donald Trump won the presidency, Zahra Billoo, executive director of the Council on American-Islamic Relations’ office for the San Francisco Bay area, posted to Facebook an image of a handwritten lettermailed to a San Jose mosque and quoted from it: “He’s going to do to you Muslims what Hitler did to the Jews.”

The post — made to four Facebook accounts — contained a notation clarifying that the statement came from hate mail sent to the mosque, as Facebook guidelines advise.

Facebook removed the post from two of the accounts — Billoo’s personal page and the council’s local chapter page — but allowed identical posts to remain on two others — the organization’s national page and Billoo’s public one. The civil rights attorney was baffled. After she re-posted the message on her personal page, it was again removed, and Billoo received a notice saying she would be locked out of Facebook for 24 hours.

“How am I supposed to do my work of challenging hate if I can’t even share information showing that hate?” she said.

Billoo eventually received an automated apology from Facebook, and the post was restored to the local chapter page — but not her personal one.

Being put in “Facebook jail” has become a regular occurrence for Shannon Hall-Bulzone, a San Diego photographer. In June 2016, Hall-Bulzone was shut out for three days after posting an angry screed when she and her toddler were called lazy “brown people” as they walked to day care and her sister was called a “lazy n—-r” as she walked to work. Within hours, Facebook removed the post.

Many activists who write about race say they break Facebook rules and keep multiple accounts in order to play a cat-and-mouse game with the company’s invisible censors, some of whom are third-party contractors working on teams based in the United States or in Germany or the Philippines.

Others have started using alternate spellings for “white people,” such as “wypipo,” “Y.P. Pull,” or “yt folkx” to evade being flagged by the platform activists have nicknamed “Racebook.”

In January, a coalition of more than 70 civil rights groups wrote a letter urging Facebook to fix its “racially-biased” content moderation system. The groups asked Facebook to enable an appeals process, offer explanations for why posts are taken down, and publish data on the types of posts that get taken down and restored. Facebook has not done these things.

The coalition has gathered 570,000 signatures urging Facebook to acknowledge discriminatory censorship exists on its platform, that it harbors white supremacist pages even though it says it forbids hate speech in all forms, and that black and Muslim communities are especially in danger because the hate ­directed against them translates into violence in the streets, said Malkia Cyril, a Black Lives Matter activist in Oakland, Calif., who was part of a group that first met with Facebook about their concerns in 2014.

Cyril, executive director for the Center for Media Justice, said the company has a double standard when it comes to deleting posts. She has flagged numerous white supremacist pages to Facebook for removal and said she was told that none was initially found to have violated the company’s community standards even though they displayed offensive content. One featured a picture of a skeleton with the caption, “Ever since Trayvon became white, he’s been a good boy,” in reference to Trayvon Martin, the unarmed black teenager killed by a volunteer neighborhood watchman in Florida in 2012.

Like most social media companies in Silicon Valley, Facebook has long resisted being a gatekeeper for speech. For years, Zuckerberg insisted that the social network had only minimal responsibilities for policing content.

In its early years, Facebook’s internal guidelines for moderating and censoring content amounted to only a single page. The instructions included prohibitions on nudity and images of Hitler, according to a trove of documents published by the ­investigative news outlet ProPublica. (Holocaust denial was allowed.)

By 2015, the internal censorship manual had grown to 15,000 words, according to ProPublica.

In Facebook’s guidelines for moderators, obtained by ProPublica in June and affirmed by the social network, the rules protect broad classes of people but not subgroups. Posts criticizing white or black people would be prohibited, while posts attacking white or black children, or radicalized Muslim suspects, may be allowed to stay up because the company sees “children” and “radicalized Muslims” as subgroups.

But the guidelines have never been publicly released, and as recently as last summer Zuckerberg continued to insist Facebook was “a tech company, not a media company.”

Unlike media companies, technology platforms that host speech are not legally responsible for the content that appears.

The chief executive has shifted his stance this year. At the company’s “Communities Summit,” a first-ever live gathering for members of Facebook groups held in Chicago in June, Zuckerberg changed the mission statement.

Earlier, he said the company would become, over the next decade, a “social infrastructure” for “keeping us safe, for informing us, for civic engagement, and for inclusion of all.”

The company acknowledged that minorities feel disproportionately targeted but said it could not verify those claims because it does not categorize the types of hate speech that appear or tally which groups are targeted.

In June, for example, Facebook removed a video posted by Ybia Anderson, a black woman in Toronto who was outraged by the prominent display of a car decorated with the Confederate flag at a community festival. The social network did not remove dozens of other posts in which Anderson was attacked with racial slurs….

Posted by btx3 on August 18, 2017 in BlackLivesMatter, The New Jim Crow, The Post-Racial Life