Riding the Subway downtown, I see a lot of different folks. From the millennials in natty suits, to the homeless. Coming back to the office from a meeting out in the ‘burbs on a train which travels through one of the poorer sections of the city, I wound up next to a young black man, in dreads and a T-Shirt… Who was pushing a baby carriage.  Struck up a conversation with him. Turns out he was the father, and he took care of the child, a little girl about 18 months old, on weekends – so his unmarried ex-girlfriend could get chores done and have some free time. He was a worker for the Subway system, who worked on the repair crew at night, and had gotten the job shortly before his daughter was born. He had taken the child on a walk along one of the waterfront parks, and announced that her birth had really turned his life around…

The Black Dad That You Don’t Think Exists

The black dad that you don’t think exists falls asleep with his son on his chest after rocking him for what felt like forever. His wife transfers the baby from his arms to the crib and coaxes him to bed where he only sleeps for three or four hours. He spent most of his wife’s pregnancy talking about legacy and is determined to create one. So he rises at 3:30 in the morning to take photographs of the city at its emptiest. He has to be to work at 7 and knows he won’t have the energy to chase his dreams after a dehumanizing 12 hour shift.

The black dad that you don’t think exists hasn’t taken a shower alone in a week. Lately he’s been combining the baby’s bath time and his own shower to maximize the ever evaporating resource of free time. After, he likes to dress his son in color palettes to match his own.

The black dad you don’t think exists wants to give his son everything, even the things he doesn’t have, yet. He wants to learn how to fish so he can teach his son how to fish. He wants to take him camping. He says things like, “we need to look up activities to stimulate the baby’s sensory development.” His wife is content to let their son bang his toys together.

The black dad that you don’t think exists sees a pretty sunset and insists upon a family portrait by the water. He takes a lot of family portraits. And still he laments about wishing he took more. The black dad that you don’t think exists fights with his wife about who gets to comfort the baby when he cries. He’s designated Sundays as family day. He slow cooks sausages and peppers. He refuses to miss his son’s doctor’s appointments, the same way he refused to miss his wife’s prenatal appointments. He dreams up family field trips. Plans to show his son the world.

The black dad that you don’t think exists sneaks his son a taste of whipped cream. He says he can’t believe a day will come when his son won’t give him unlimited cuddles. He lets his son use his dreadlocks as handlebars to pull himself into a standing position. He wishes he could make a room entirely out of pillows so his baby never fell down on anything hard.

The black dad that you don’t think exists does. And he is not an anomaly. 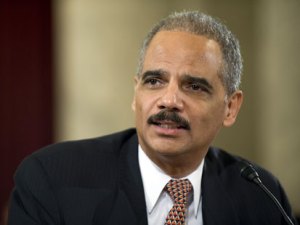 Holder, a Queens native and the first black Attorney General, urged the 400 worshippers at the Memorial Presbyterian Church on Baldwin Turnpike in Queens, N.Y., to orchestrate a “spiritual awakening,” according to the New York newspaper. The Attorney General said a father’s involvement in a family can help combat poverty and crime in black neighborhoods, according to Newsday.

“Too many men in the black community have created children and left them to be raised by caring mothers. These women do a wonderful job, but we ask too much of them and too little of our men,” Holder told the congregation, which included members of his family, according to Newsday. “It should simply be unacceptable for a man to have a child and then not play an integral part in the raising and nurturing of the child.”

Holder’s comments hearken back to comedian Bill Cosby’s speech before the NAACP in 2004, in which he sparked a national debate by urging African-American fathers to take responsibility for their children. And on Father’s Day 2008, then-presidential candidate Barack Obama gave a speech in whcih he said “too many fathers” are “missing from too many lives and too many homes.”

ttorney General Eric Holder called on absentee black fathers yesterday to take an active role in their children’s lives, Newsday reported today.Holder, a Queens native and the first black Attorney General, urged the 400 worshippers at the Memorial Presbyterian Church on Baldwin Turnpike in Queens, N.Y., to orchestrate a “spiritual awakening,” according to the New York newspaper. The Attorney General said a father’s involvement in a family can help combat poverty and crime in black neighborhoods, according to Newsday.