Trump has been lying about his supposed wealth for a long time. A good part of that has to do with the scam surrounding the “Trump” brand, and it’s supposed value in the luxury marketplace. A good portion of his self reported $10 billion in wealth is based on wildly inflated value of the Trump name. Even his hard assets , the Golf Courses, Hotels, and Casino aren’t worth nearly as much as an uncritical eye would believe.Like anyone who is big in commercial Real Estate, Trump is heavily “leveraged”. In layman’s terms it is like owning $200,000 on a house which can only be sold today for $100,000 – betting that the Real Estate value of houses in the area will go up in 3 years enough to make a profit after paying off the debt. In the high-flying world of certain types of business, your ability to acquire debt is counted as an asset. Ergo, you are worth $1 million – because you can borrow $1 million, even though you only have $100 in the bank. The reason so many Real Estate folks go bankrupt quite simply is they cannot generate enough revenue based on their investments to cover the debt. That house you owe $200,000 on has a monthly mortgage of $2,000, and it can be rented for only $1,000 a month – meaning you have to come up with another $1,000 a month to make the mortgage from somewhere else. Buy enough of those, and don’t flip them fast enough,  and you go bankrupt.

In the real world, your net worth is the value of what you own or have in the bank, minus what you owe. Cash on hand is king. $100 in assets with $50 in debt mean you are worth $50.

Which from all indications is about where the Chumph is. Stealing $1 million a month from his campaign coffers to service the debt on his various scams by paying his own companies, strongly suggest he not only has a cash flow problem, he is at or past the point of having a negative net worth.

Despite all the huffing and puffing…It indeed looks like the boy is busted.

Now there is a huge difference between a guy like Warren Buffet, and a Chump wannabe billionaire. Warren can write a check for $1 billion, and frequently comes up with $50, $100, or even $500 million as part of his investment empire. The Chump on the other hand, seems to be struggling to have $1 million cash on hand to pay his promised charity donation to Veterans – which he apparently paid from his campaign donations.

Take that from a guy who has experience being hired to do “due diligence” in major investment deals to discover the true value of a company’s assets. 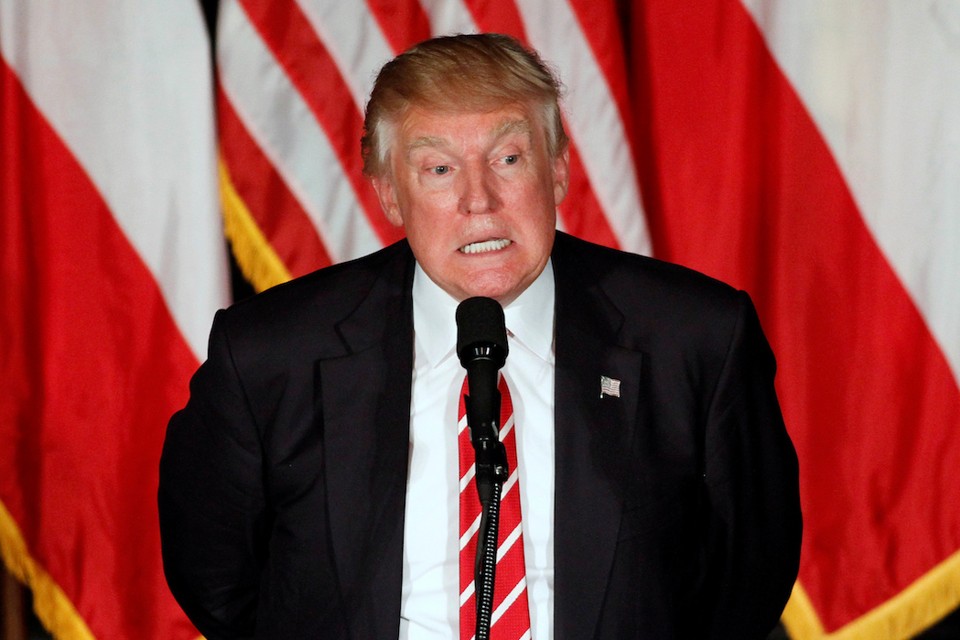 The Chumph begs for money to stay afloat

I confess even I’m surprised at what the overnight FEC filings revealed about the Trump campaign. Posting the ‘Trump is Broke‘ column yesterday made me feel at least a touch exposed since I figured he’d add (either from his own money or fundraising) at least some additional funds to the paltry $2.4 million cash on hand in his previous filing. Appears not. Now on top of that it’s revealed that he’s been using his presidential campaign to funnel millions of dollars back into his own businesses. The new filing shows the campaign had only $1.3 million in cash on hand at the beginning of this month, in comparison to $42 million on hand for the Hillary campaign.

It’s important to see those numbers in the proper perspective.

Yes, Clinton has massively more money than Trump. But that’s about the amount of money sheshould have. This isn’t to take away from the accomplishment. It’s a lot of money and it came while she was still having to spend money on the on-going primaries. But it’s in the range of what you would expect from a well-oiled team of professionals drawing on a robust fundraising apparatus. Trump’s amount of cash wouldn’t be terribly impressive for a competitive House race. His campaign is essentially broke. Which, as I noted yesterday, means Trump must be broke, too, or so cash poor as to amount to the same thing for the purposes of this campaign.

Even more revealing is the fact that Trump has been using a huge amount of campaign expenditures to cycle money back through his own businesses. According to an analysis by the AP, through the end of May Trump had plowed $6.2 million into various Trump companies, which is to say, back into his own pocket. That’s roughly 10% of his campaign spending so far, which is almost entirely from the loan (which he can still repay to himself out of future fundraising) he made to his campaign. He kept up the pace in May, spending $6.7 million on his campaign and more than a million of that to various Trump enterprises.

What’s notable about that roughly 10% of money back into his own pocket is that Trump only has businesses in so many sectors. He doesn’t appear to have a company to make red trucker hats and he doesn’t own radio and TV stations to run ads. So that 10% is basically as much as he could possibly run to own companies.

Perhaps the most revealing detail about the May filing is that Trump actually did loan his campaign additional funds – a bit over $2 million. But this shows more just how hard up Trump is. His campaign is in desperate need of funds. Like I said, $1.3 million cash on hand is stone broke for a summer presidential campaign. He clearly has no principled resistance to loaning his campaign more money. And he’s in desperate need of a few tens of millions of dollars. Put this together with having to be shamed into coughing up the $1 million contribution to a vets organization and the implication is clear: Trump is very hard pressed to come up with even a few million dollars. And this from a man purportedly worth $10 billion.

Trump’s promises of vast riches got the GOP into a bind relying on him to fund a general election on his own. But that was all a lie. He’s broke or near broke. And the GOP is now facing mid-summer with a campaign that is broke, has no fundraising apparatus, no candidate with big bucks and no field operation. He’s done the GOP worse than the most screwed over creditor he ever sharked.

I had posited in a previous piece that Donald Trump is not actually a billionaire, as he loves to claim – and based on the type of business he is in (Real Estate) that any realistic evaluation of his actual net worth (assets minus liabilities) would probably place him in the under $250 million range. Real Estate deals tend to be heavily leveraged. Meaning the “Bank” owns 90% or more. Indeed in Trump’s normal deal he winds up actually owning not much more than his name on the side of the building.For someone willing to take the risk of punitive litigation by Trump – it isn’t very hard to puncture that veil, and get a true picture.

And I should mention that $250 million may be an optimistic figure – based on the rate he now appears to be borrowing money. That indicates a sinking ship…Of his own device.

Now, the press is beginning to go after this issue…And it isn’t going to be pretty.

The GOP nominee is rich. But how rich depends on odd accounting and subjective criteria.

Donald Trump claims a net worth of more than $10 billion and an income of $557 million. But he appears to get there only by overvaluing properties and ignoring his expenses.

POLITICO spoke with more than a dozen financial experts and Trump’s fellow multimillionaires about the presumptive Republican nominee’s financial statement. Their conclusion: The real estate magnate’s bottom line — what he actually puts in his own pocket — could be much lower than he suggests. Some financial analysts said this, and a very low tax rate, is why Trump won’t release his tax returns.

“I know Donald, I’ve known him a long time, and it gets under his skin if you start writing about the reasons he won’t disclose his returns,” said one prominent hedge fund manager who declined to be identified by name so as not to draw Trump’s ire. “You would see that he doesn’t have the money that he claims to have and he’s not paying much of anything in taxes.”

Trump is certainly wealthy. But in a campaign where the New Yorker has portrayed himself as the biggest, the richest, the classiest and the best at everything, disclosing that he is less rich than he lets on could be damaging. And it is a line of attack Democrats are already using and hope to pound away on until November.

The case against Trump’s accounting of his wealth: His businesses apparently generate a lot of revenue but may not put much cash in his pocket; he assigns himself a net worth that is impossible to verify and may be based in part on fantasy; and he is selling assets and increasing debt in ways that suggest a man scrambling for ready cash.

In response to a list of questions for this story, Trump campaign spokeswoman Hope Hicks emailed: “The report speaks for itself.” If it does, the report does not speak clearly.

The financial disclosure form showed Trump adding fresh debt of at least $50 million, though a campaign news release said Trump is using increased revenue to reduce his debt, which is now at least $315 million and possibly more than $500 million. The disclosure also suggests that Trump sold fund assets to raise as much as $7 million in cash and individual securities to raise up to $9 million more…More Here…

In his first major act of public philanthropy, Facebook CEO Mark Zuckerberg plans to donate $100 million to the public school system in Newark, N.J., a troubled and crime-ridden city across the Hudson River from New York. The formal announcement will reportedly come Friday on Oprah Winfrey’s talk show, where Zuckerberg will be joined by Newark Mayor Cory Booker and New Jersey Gov. Chris Christie, who will formally cede some control of the Newark school system to Booker’s municipal administration.
Zuckerberg’s reasons for choosing the Newark public school system are not completely clear; he hails from the New York City metro area, but the Times reported that his connection to Newark derives from having met and connected with Booker, a young, charismatic, and high-profile reform politician.

Forbes estimates that Zuckerberg is now worth $6.9 billion, putting him seven spots above Apple CEO Steve Jobs, who is estimated to be worth $6.1 billion, ranking 42 on Forbes’ list.

The potential donation would amount to over 20% of Newark’s budget of $940 million.

Newark spends about $22,000 a year on each of its 40,000 pupils, but only about half of its students graduate. Of those who do, only one-fifth go on to four-year colleges. More than 85% of the Newark students at community colleges need remedial help in math and English.

Foundations and wealthy investors have been recently donating large sums of money into education to make changes. The money usually comes in exchange for something like increased pay for teachers or measures to make sure teachers are effective.