A lot of noise blaming Bill Clinton for the draconian drug law he supported passing in 1993. That is a bit of  a false canard for a number of reasons. Fist is the legislation passed by Congress only affected Federal Law. Than means that it didn’t apply to the states. A number of state passed their own draconian drug laws, but they passed those in their own legislatures. Of the 1.5 million Americans held in correctional institutions (not jails) and Federal Prisons, about 210,000 are Federal Prisoners. That is about 14%. If you add those prisoners held in Jails, the number of incarcerated is 2.1 million, the Federal part of that shrinks to 10%. The States with the highest incarceration rates? 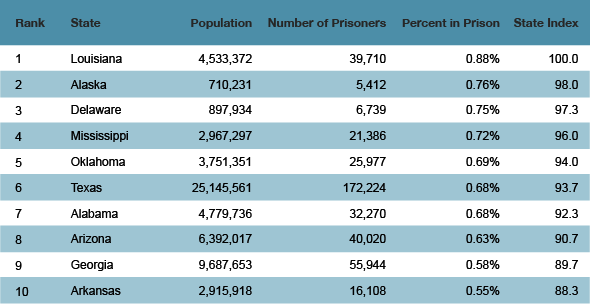 9 of 10 are in the “Red Zone”run by Republicans. 27 States incarcerate 80% of the prisoners in the US. Sounds bad – but 27 States have 80% of the population. Fewer people live in Wyoming than in Washington, DC.

Second – a lot of these laws, particularly in the Major Cities, were passed at the behest of black citizens and organizations in response to the soaring crime rate driven by the crack epidemic.

He said the bill lowered the country’s crime rate, which benefited African-Americans, achieved bipartisan support, and diversified the police force. He then addressed a protester’s sign, saying:

“I don’t know how you would characterize the gang leaders who got 13-year-old kids hopped up on crack and sent them out onto the street to murder other African-American children,” Clinton said, addressing a protester who appeared to interrupt him repeatedly. “Maybe you thought they were good citizens …. You are defending the people who kill the lives you say matter. Tell the truth. You are defending the people who cause young people to go out and take guns.”

The Clintons have faced criticism from BLM activists and younger black voters for months now over that bill, which they say put an unfairly high number of black Americans in prison for nonviolent offenses.

After a protester interrupted him repeatedly, Bill Clinton began to take on that critique directly, making the claim that his crime bill was being given a bad rap.

“I had an assault weapons ban in it [the crime bill]. I had money for inner-city kids, for out of school activities. We had 110,000 police officers so we could keep people on the street, not in these military vehicles, and the police would look like the people they were policing. We did all that. And [Joe] Biden [then senator and chair of the Senate Judiciary Committee] said, you can’t pass this bill, the Republicans will kill it, if you don’t put more sentencing in it.”

“I talked to a lot of African-American groups,” Clinton continued. “They thought black lives matter. They said take this bill, because our kids are being shot in the street by gangs. We have 13-year-old kids planning their own funerals.”

Throughout the spirited defense of his policy, Clinton continued to be interrupted, and he repeatedly seemed to single out one protester.

For several minutes, the discussion of the crime bill, Clinton’s exchange with the protester and the crowd’s attempts to yell and chant over her were missing one thing: any mention of Hillary Clinton, the one Clinton running for president this election cycle.

Posted by btx3 on April 8, 2016 in BlackLivesMatter

When you do the Math – the coalition of Minority Voters and 20-30% of white voters makes it difficult for Republicans to win elections. Indeed, George Bush owes his illegitimate  Presidencies to systemic voter disenfranchisement of minorities – in what has become The New Jim Crow.

As such, along with disbanding Unions, Republicans across the country are using every weapon in the legislative arsenal to eliminate the black vote. Whether through gerrymandering political districts, or though more heinous tricks such as Voter IDs and purged voter rolls.

Republicans, wed to the “Southern Strategy”, the racial dynamics of white victimhood, the reactionary and racist Tea Party, and anti-immigration from brown countries – have virtually no chance of increasing the number of black, Hispanic, or Asian voters in their party.

So their solution is to “disappear” Minority voters.

Bill Clinton – no longer a political candidate for office, speaks out…

Speaking before a group of liberal youth activists Wednesday, Clinton said laws in states like Florida and New Hampshire are aimed at limiting voter turnout and keeping young people from the ballot box.

“There has never been in my lifetime, since we got rid of the poll tax and all the voter Jim Crow burdens on voting, the determined effort to limit a franchise that we see today,” Clinton said at Campus Progress’s annual conference in Washington.

Jim Crow laws, enacted between 1876 and 1965, included fees and laws historically used to keep African-Americans from voting. Clinton said Republican governors and legislators are now trying to “keep most of you [young people] from voting next time.”…

Clinton was critical of regulations preventing same-day registration and specifically referenced Republican Florida Gov. Rick Scott’s move in March to overturn a law that allowed convicted felons to vote after they completed their probation.

“Why should we disenfranchise people forever once they’ve paid their price?” Clinton said. “Because most of them in Florida were African Americans and Hispanics and would tend to vote for Democrats, that’s why.”

Can We Borrow This Guy… For the Next 2 Years?

It seems that Italy has a “Bubba” problem. Perhaps the ever emerging scandals surrounding Italy Premier Silvio Berlusconi can be used to strengthen our ties with Italy, and help both our countries in light of Republicans taking over the House in this country!

Italian Premier Silvio Berlusconii - "Do I look like I had sex with that woman?"

The tawdry allegations against Silvio Berlusconi just keep on coming: Now, a call girl (who claims the Italian premier paid her more than $14,000 for sex) says he used his private jet to supply marijuana to the sex parties at his villa. “There was grass available in all the rooms,” Nadia Macri, 28, tells investigators—although she says she never saw Berlusconi himself smoking.

The aspiring model says pot was provided for at least 25 young women at the villa. Her claims are part of an investigation into a cocaine trafficking ring in which one of Berlusconi’s former officials was allegedly involved. Of course, Berlusconi’s lawyer denies Macri’s allegations, and insists “parties at Villa Certosa are always conducted with the utmost propriety.” Suuuure they are.Click here for the latest allegations against Berlusconi regarding a teenage Moroccan belly dancer.

Did they say “Teenage Moroccan belly dancer?” Damn! That is hotter than any “little blue dress”!

With the incoming Republicans desire to “investigate“, perhaps we can provide them with suitable entertainment for the next two years (not coincidentally saving the country and driving up the jobs sector in hand cream manufacturing!)…

By appointing Mr. Berlusconi to some job in the Obama Administration!

Posted by btx3 on November 4, 2010 in News, Stupid Republican Tricks

The Big Dog Shows Why He’s Still Got It

Bill Clinton had ’em rolling in the aisles at the Gridiron Dinner, D.C.’s annual meeting of politicians and the press, poking fun at himself, Barack Obama, Fox, and … Dancing with the Stars???

Clinton, filling in for Obama — who had his hands full with some guy called Healthcare Bill? Whatevs! — opened his March 20 remarks by saying that he regretted having to appear without “either of the Bushes,” referring to his disaster-relief partners, George H.W. Bush and George W. Bush. “I’m used to having them by my side when I walk into a disaster area,” Clinton said.

Oh, but he was just getting started. Regarding healthcare, he said, “It may not happen in my lifetime, or Dick Cheney’s, but hopefully by Easter,” later adding that his new favorite cocktail is “Lipitor on the rocks.”

On Obama’s recent appearance on Fox News: He was “keeping his word about meeting with hostile leaders without preconditions.”

On Rahm Emanuel, Obama’s legendarily short-tempered Chief of Staff who also worked in the Clinton White House: “I found Rahm. I created him. I made him what he is today. I am so sorry.”

On why he was free last night: “Since they turned me down for Dancing With the Stars, I had nothing better to do.”

On Orrin Hatch, who spoke earlier in the evening: “Orrin, he’s the wittiest of all the Republicans. That ‘s sort of like saying he’s the tallest of the Seven Dwarfs.”

On Democrats seeking kickbacks to vote for the health-care legislation: “I flew here from Cleveland, and I flew out of the Dennis Kucinich Airport.”

Hillary Clinton Gets Down, Another Suitor For Chelsea

Hillary Clinton is visiting South Africa to discuss policies with the South African Government. All is not work, however – as Hillary shows she can still cut a rug.

The second part of the video shows a Kenyan man, who has made a marriage proposal to Bill Clinton for  Chelsea Clinton’s hand…

Chelsea is all grown up now, and by all reports an independent intelligent woman, who inherited some of the best of both parents…

Brother, you could be in a world of trouble is Bill says yes.

more about “Hillary Clinton Gets Down, Another Su…“, posted with vodpod

Bill Clinton to Become a Sigma!

The newest Sigmas are to be Bill Clinton, and the Rev. Al Sharpton…

The men of Phi Beta Sigma are hosting their National Conclave this week in New Orleans, Louisiana.

According to sources in New Orleans yesterday the men of this brotherhood voted on several members to be inducted into the fraternity at a later date. END_OF_DOCUMENT_TOKEN_TO_BE_REPLACED