This morning, in response to the overwhelming outrage –

The more things change…The more they remain the same. This is all about the big cell carriers getting their way, and screw the consumers an small station owners. The coverage area of the crappy new Digital TV is pitiful, and many subscribers are left with no option but to pay exorbitant, rip-off cable TV bills for piss poor service and channel selection. Consumers yet again screwed by a corrupt government. 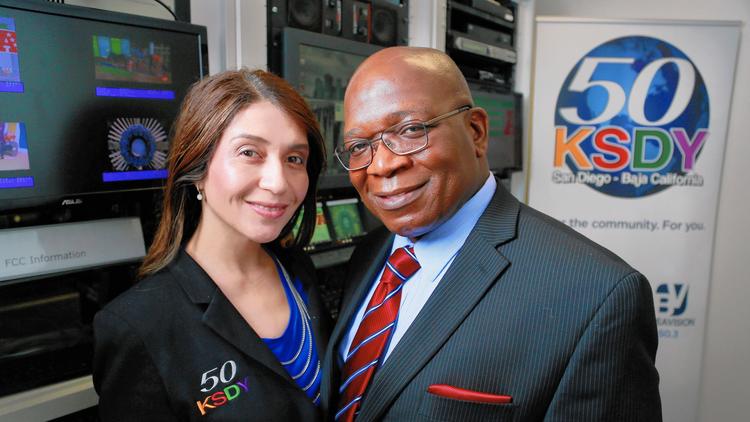 Many small TV stations may soon be forced off the air

Maxwell C. Agha and his wife, Michelle Diaz Agha, have pumped $15 million into their small San Diego TV station over the last two decades so they could broadcast Spanish-language news, Catholic shows and local programming.

But KSDY-TV Channel 50 and many other small, low-power TV stations, which often broadcast foreign-language and religious programming, soon could be silenced — knocked off the air involuntarily by the federal government with no compensation to their owners or alternatives for their often low-income viewers.

The stations are the potential collateral damage of an ambitious attempt, set to begin next month, to transform the public airwaves for the mobile needs of the 21st century.

The Federal Communications Commission plans to use a complex auction to shift a huge swath of public airwaves from carrying TV signals to delivering wireless services to smartphones and other data-hungry mobile devices.

Because of that effort, the Aghas could face the prospect of spending millions of dollars more to keep their station on the air by moving to another channel — if one is even available after broadcasters are squeezed into a smaller chunk of the radio-wave spectrum.

If there is no free channel available, KSDY would go dark.

“They awarded these licenses and asked people to invest and now they say they can just take this and auction it and keep the money,” said Maxwell Agha, chief executive of International Communications Network Inc., which owns the station. “It’s a totally unfair process.”

The two-part auction, which begins March 29, aims to attract some of the nation’s 1,782 full-power broadcasters and 405 specially licensed Class-A low-power stations to give up their rights to those airwaves in exchange for a cut of the proceeds paid by wireless providers for licenses to use them.

The auction could produce as much as $40 billion in new licensing fees from AT&T Inc., Verizon Communications Inc. and other wireless providers. Proceeds of even half that could lead to a jackpot of hundreds of millions of dollars to some TV station owners who decide to give up their airwaves.

But the auction could be a disaster for many of the smallest players in the broadcast world and their viewers: the 1,822 standard low-power TV stations.

“It’s catastrophic,” said Ravi Kapur, who owns a Chicago low-power station and founded a network that airs South Asian programming on low-power stations in Los Angeles and Houston. “These stations will go off the air and there will be a whole lot of calls to the FCC and members of Congress and it will be too late.”

The FCC created low-power TV licenses in 1982 “to provide opportunities for locally oriented television service.” The stations are limited in their signal power, allowing them to broadcast on unused patches of the airwaves as long as they don’t cause interference with full-power stations.

Because they are easier to obtain and less costly to run, low-power TV stations have a much more diverse ownership.

Posted by btx3 on February 20, 2016 in American Genocide, American Greed, The Definition of Racism, The New Jim Crow

Is going down. His Church is now up for Auction. Apparently being Hannity’s House Negro didn’t pay enough to pay the bills.

I have posted about him previously –

Rev Mack Daddy At It Again

Rev Mack Daddy is Back!

This Vehemently Anti-Gay Church Might Get The Ultimate Karmic Smackdown

An LGBT advocacy group hopes to secure the ATLAH World Missionary Church for its homeless clients.

A New York church notorious for posting homophobic messages on its billboard may be on the auction block. But if fundraising efforts are successful, the parish’s history of hate could be repurposed into something truly beautiful.

A New York state judge has ordered the ATLAH World Missionary Church to be sold at a public foreclosure auction, according to court records cited by DNAinfo New York. The church, which has been known to display messages like “Jesus would stone homos” and “Obama has released the homo demons on the black man” on its billboard, has reportedly amassed debts and tax liens totaling more than $1.02 million.

The Harlem church could prove to be a commodity in Manhattan’s cutthroat real estate market. But the Ali Forney Center, an advocacy group dedicated to homeless lesbian, gay, bisexual and transgender (LGBT) teens and young adults, hopes that an online fundraiser will help raise $200,000 to secure the property as housing for its clients.

Carl Siciliano, who is the Ali Forney Center’s founder and executive director, said in a press release that repurposing the church to house homeless LGBT youth would “truly be a triumph of love over hatred.”

“The biggest reason our youths are driven from their homes is because of homophobic and transphobic religious beliefs of their parents,” he said. “Because of this, it has been horrifying for us to have our youths exposed to Manning’s messages inciting hatred and violence against our community. It has meant the world to us that so many Harlem residents have stood up to support our young people, and are now urging us to provide urgently needed care at the site of so much hatred.”

LGBT rights activist Scott Wooledge, who is working with the Ali Forney Center to raise the funds to buy the church and has raised over $200,000 for homeless youth over the past two years, echoed those sentiments.

“We, as a community, have a golden, once-in-a-lifetime opportunity to turn what was once a center of appalling hate into a home where our youth can be safe, nurtured, supported and thrive into self-sufficient adults,” he told The Huffington Post in an email. “Let’s seize the day, and turn the page on an ugly chapter in Harlem’s history.”

Stacy Parker Le Melle, founder of Harlem’s “Love Not Hate” Movement, told The Huffington Post, “When the ATLAH story broke on Thursday, immediately I heard from neighbors: Wouldn’t it be amazing if an LGBT group could acquire the property? What if it were the Ali Forney Center? We all knew that this would be poetic justice. We need to care for those kicked out of homes, often on religious-based grounds. We need to care for those most vulnerable to ATLAH’s hate speech.”

ATLAH’s pastor seemed to downplay his parish’s debts in an interview withDNAinfo New York, and vowed to cite the church’s tax exempt status in its fight against the foreclosure order, which he called a “land grab.”

“I assure you, it’s about a water bill and a tax that can’t be levied against this church,” Rev. James David Manning, who made headlines in 2014 when he argued that Starbucks flavored its coffee drinks with “sodomites’ semen,” told DNAinfo.

Posted by btx3 on January 30, 2016 in Black Conservatives