Quite frankly the only headless bodies I see right about now are the Tea Bagger style conservatives whose lies have reached epidemic proportions.

Headless bodies and other immigration tall tales in Arizona

Ay, caramba! Those dark-skinned foreigners are now severing the heads of fair-haired Americans? Maybe they’re also scalping them or shrinking them or putting them on a spike.

But those in fear of losing parts north of the neckline can relax. There’s not a follicle of evidence to support Brewer’s claim.

The Arizona Guardian Web site checked with medical examiners in Arizona’s border counties, and the coroners said they had never seen an immigration-related beheading. I called and e-mailed Brewer’s press office requesting documentation of decapitation; no reply.

Brewer’s mindlessness about headlessness is just one of the immigration falsehoods being spread by Arizona politicians. Border violence on the rise? Phoenix becoming the world’s No. 2 kidnapping capital? Illegal immigrants responsible for most police killings? The majority of those crossing the border are drug mules? All wrong.

This matters, because it means the entire premise of the Arizona immigration law is a fallacy. Arizona officials say they’ve had to step in because federal officials aren’t doing enough to stem increasing border violence. The scary claims of violence, in turn, explain why the American public supports the Arizona crackdown.

Last year gave us death panels and granny killings, but compared with the nonsense justifying the immigration crackdown, the health-care debate was an evening at the Oxford Union Society.

Two months ago, the Arizona Republic published an exhaustive report that found that, according to statistics from the FBI and Arizona police agencies, crime in Arizona border towns has been “essentially flat for the past decade.” For example, “In 2000, there were 23 rapes, robberies and murders in Nogales, Ariz. Last year, despite nearly a decade of population growth, there were 19 such crimes.” The Pima County sheriff reported that “the border has never been more secure.”

FBI statistics show violent crime rates in all of the border states are lower than they were a decade ago — yet Sen. John McCain (R-Ariz.) reports that the violence is “the worst I have ever seen.” President Obama justifiably asserted last week that “the southern border is more secure today than any time in the past 20 years,” yet Rush Limbaugh judged the president to be “fit for the psycho ward” on the basis of that remark.

You know it’s been hard out there for an old style Civil Rights leader these last few years. Very few, if an issues in the black community have lent themselves to the don the walking shoes and placards and march down main street approach.

Looks like Al has found a new clientele – Hispanics (alway suspected that process didn’t have enough wave in it!)! 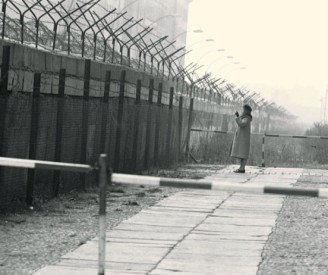 The Berlin Wall - Prooof governments can't keep people in, any more than you can keep them out. The last gasp of a dying Government.

In any event, while it is certainly true that the Republicans in Arizona have passed a law of questionable constitutionality – and arguably targets one sector of the population based on ethnicity…

President Obama has already lined up the DOJ to challenge the law in the courts. Other Hispanic Civil Rights, as well as the NAACP will join with the DOJ to file amicus briefs, or file their own cases. Ergo – this was a really stupid grandstanding ploy by Arizona wing-nut racist Republicans, which is under attack already by the leal apparatus of the Federal Government, as well as COngress.

New York activists, including the Rev. Al Sharpton, compared Arizona‘s new immigration law to apartheid, Nazi Germany and the Jim Crow South – and vowed to shut it down with mass protests.

“We will bring Freedom Walkers to Arizona just like Freedom Riders went to the deep south 50 years ago,” Sharpton said yesterday.

Standing with local clergy, elected officials and a leader of the Hispanic Federation, Sharpton said he would mobilize people from across the country to march in Arizona – and get arrested, if necessary – to stop the controversial new law.

“We cannot sit by and allow people to be arbitrarily and unilaterally picked off as suspects because of the color of their skin,” Sharpton said.

Gov. Jan Brewer (R-Ariz.) signed a bill last week authorizing police to question individuals about their immigration status if they suspect they could be in the country illegally.

It now faces a slew of legal challenges and a review by the U.S. Department of Justice that was ordered by President Obama.

Meanwhile, in Washington, Senate Democrats said they planned to use the Arizona law to push for an immigration reform bill, but Republicans said other legislation took precedence.

“The idea that state by state would start developing its own immigration laws in the country – imagine what a patchwork that might look like,” Sen. Chris Dodd (D-Conn.) said on NBC‘s “Meet the Press.”