Born in 1891, Archibald Motley would document, through his art – the next 70 years of black experience in Chicago and France.

Portrait of a Sophisticated Lady 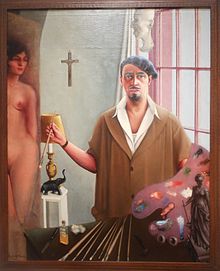 Archibald Motley, The Painter Who Captured Black America in the Jazz Age and Beyond

The artist Archibald Motley captured both the high times and cultural vibrancy of the Jazz Age, as well as graver themes of racism and injustice.

The sexy sway of a 1920s Paris nightclub, filled with light and dark-skinned people pressed against each other.

The bustling streets of the almost exclusively black “Bronzeville” neighborhood Chicago in the 1930s under a nighttime glow.

A depressing surreal scene of horror following the death of Martin Luther KingJr.and the failings of the 1960s Civil Rights movement.

These are just a handful of the diverse visual expressions of the African American experience that the artist Archibald Motley so adroitly and sumptuously captured throughout his career.

As versatile in his aesthetic style as he was committed to scrutinizing African American culture, Motley was a uniquely daring and sharp artist who stood out even among the Harlem Renaissance greats.

Yet, Motley’s name does not elicit the same nods of recognition and respect as his peers, like Langston Hughes, Josephine Baker, and Zora Neale Hurston. That could–and certainly should–change after the retrospective Archibald Motley: Jazz Age Modernist opens October 2 at the Whitney Museum of American Art.

Traveling through different chapters of his career, though not boxed into a strict chronology, the exhibition showcases how Motley was a thorough and sensitive observer of the black community, documenting its diversity while bringing his own keen perspective to its traditions and subcultures.

Motley “set his work apart” because he “created a modern, vibrant world which, as seen through a pair of jaded, laserlike ‘Negro’ eyes, revealed the jazz-and-blues-accented absurdities that lay behind life’s facades and public face,” writes Richard J. Powell in “Becoming Motley, Becoming Modern” an essay in the book,Archibald Motley: Jazz Age Modernist.

Powell, who is an art historian and Dean of Humanities at Duke University, curated the Whitney exhibition.

In other words, Motley wasn’t afraid to capture the good and the bad of black life, as his peers made tremendous gains yet the community in general often struggled in poverty and disenfranchisement in a segregated, very racist America.

At least a significant part of Motley’s distinct perspective on African American life came from his unique upbringing for a black man of his era.

Born in New Orleans in 1891, Motley was raised in Chicago’s then largely white immigrant Engelwood neighborhood and married his white childhood friend, Edith Granzo, in 1924.

Trained at the School of the Art Institute of Chicago, Motley’s earliest critically-acclaimed paintings were portraits of different figures within the African American community.

His 1924 Mending Socks depicted his grandmother, Emily Motley, a former slave, sitting with a quiet pride and refinement.

Motley was not so forward-looking that he ignored the complicated, painful slaveholding past. Mending Socks features part of a portrait of his grandmother’s mistress in the upper left corner, hanging over her.

As important as it was for Motley to capture history, it was equally, if not more, significant to him depict the spectrum of skin tones considered black. A blend of ethnicities himself, he was dedicated to painting “the whole gamut,” as he said, of African American complexions.

1920’s Mulatress with Figuring and Dutch Seascape and 1925’s The Octoroon Girl speak to his commitment of not only visually presenting multi-racial figures, but doing so in a way that showed them as refined, strong figures.

As the Whitney exhibition notes of Motley’s artistic interest in these portraits: “On the one hand, he believed that seeing themselves in art would help African Americans feel pride in their own racial identities; on the other, he hoped that seeing beautiful contemporary black subjects would dispel stereotypes and undermine racism.”...More…

Posted by btx3 on September 30, 2015 in Black History, Giant Negros