The Internet war against the Chumph racist trolls is heating up. Antifa, the name Anti-Fascists on the Internet have chosen, are attacking and taking down neo-Nazis where they live.

The article describes these heroes as “far-left”. I am not terribly sure that is an accurate description. You don’t have to be “far-left” to hate neo-Nazis and white supremacists. I suspect the movement is a lot deeper than the authors suspect – and it is just getting started.

There are a lot of ways to take down alt-right trolls which don’t involve any computer hacking skills. Making your voice known and going after the enablers of these scum requires nothing more than complaints to Reddit, Facebook, or Twitter. Boycotting the advertisers of Brietbart has been effective.  Black Folks should be boycotting the conservative site Townhall for it’s promotion of Lawn Jockeys like Uncle Tommy Sewage. Recent ads included Amazon, Sprint, and Medix Select. email, send a snailmail, or call and tell them you find the content offensive and won’t be buying their products. Go after these clown means of making money, and they will go away.

FOR EVERY NEO-NAZI meme, there is an equal but opposite Nazi punch. Think of it as the Third Law of the internet, if Newton was a subreddit.

OK, that’s a little absurdist, but increasingly, it does seem like every upwelling of far-right agitation—in real life or online—gets met with a reciprocal surge from an equally extreme niche on the far left. Somebody punches the white nationalist Richard Spencer in the face in a video that goes viral. Breitbart provocateur Milo Yiannopoulos tries to give a talk at UC Berkeley. Over 150 protestors break windows and throw fireworks at the police until administrators call off the event. And President Trump tweets about it.

The progression isn’t strict call-and-response, to be sure. But it does show that the white nationalist internet has a kind of counterpart. Some of these far-left activists are militant antifascists—“antifa” for short. And not to get all falsely equivalent on you, but many are young, angry, and know their way around a meme.

They may well indeed express more egalitarian ideals than neo-Nazis (who doesn’t, really?), but they’re also anarchists prone to property destruction and online abuse. Worse, by giving as good as they get, they double down on political polarization, driving the national narrative even further from center.

But it’s not all yelling “anarchy” and lighting stuff on fire. They’re also tech savvy. “Since the first white supremacist sites went online, people have been trying to take them down, figure out people’s passwords, and dox them,” says Stanislav Vysotsky, a sociologist and criminologist at the University of Wisconsin-Whitewater. “Later on, it became DDos attacks.” Anonymous and spinoff groups like LulzFinancial certainly seem to be on Team Antifa, doxxing scores of far-right agitators.

But President Trump’s election has rejiggered the antifa-versus-white-supremacist struggle. “Most of the trolling had been coming from the right,” says Phyllis Gerstenfeld, a criminal justice professor at CSU Stanislaus who has studied extremist groups on the internet. “Suddenly, we see a lot more nasty trolling coming from the left. It’s a reaction to power shifts.” With the right in power, the left is alienated and ready to raise hell.

And that makes for a huge influx of social media-focused, younger antifascists—a mirror universe of the self-described alt-righters you’d see on Gab. “People see the iconography on social media, download a flier and just call themselves an antifascist,” says Vysotsky. “The internet makes it all very accessible.”

This new guard—taking up the internet-y rallying cry “bash the fash”— are responsible for things like the popular Nazi punching memes that followed the attack on Spencer. They’ve spread beyond antifascist subreddits to the general public.

While it’s easy to see why non-Nazis might find that satisfying—we’ve spoken to Richard Spencer at length—having a laugh at violence is hardly a feel-good moment. “I don’t know that I want punching anyone to be the model of what political action looks like,” says a longtime antifascist activist and participant in the CrimethInc anarchist network who goes by the nickname “A.”

SK—a “university age” antifascist and moderator of the /r/militant subreddit—feels differently. “We just fight fire with fire,” he says. “If they send us Pepes with swastikas, we’ll send them some weird shitty photoshop. The alt-right likes to call it The Meme War.”

That sounds relatively harmless, but the memes on both sides tend toward threats of violence.

And it doesn’t end with memes. “Members of Neo-Nazi groups occasionally pose as reporters to get information on antifascists so they can target them later,” says another /r/militant mod, whose username is IamSeth (and who required mulitiple encrypted chat apps to be convinced I wasn’t a white supremacist in disguise).

Meanwhile, the Meme War has metastasized to Reddit at large: “/r/antifa was never an antifascist subreddit,” IamSeth says. “It is a honeypot run by members of the Ku Klux Klan.” (I wasn’t able to confirm the Klan connection, but when I reached out to the /r/antifa mods, an individual who goes by diversity_is_racism denied the honeypot claim, but said he or she thinks Richard Spencer is “a good guy.”)

That’s the cost of anonymity—on a subreddit, nobody really knows if you’re antifa or antiantifa. The only way to get an existing subreddit taken down is to show it has become a platform for doxxing—which is allegedly what happened on the /r/altright and /r/alternativeright subreddits earlier this week when they posted links to WeSearchr, for a crowdfunded bounty calling for the doxxing of the antifa activist who punched Spencer. Here’s a screenshot from Gab:

“I’ve seen antifascists doxxing, but I’ve never participated,” says SK. To antifa activists though, doxxing is justified by their opponent’s behavior, which in their view, is worse. “The alt-right is just online making death treats to people,” SK says. “It does disturb your peace of mind, but I think death threats are kind of gross.”

So the Meme War rolls ever on. According to Vysotsky, it’s already happening: “In Wisconsin, a person put up a Nazi flag, and an antifascist published an address online. But because it was a duplex, the address was incorrect,” he says. “The Latino family living there started receiving threats.”

Some antifascists aren’t bothered by this kind of collateral damage. “People are going to do stupid shit and make the movement look bad,” SK says. “But if you’re fighting against oppression, even if you don’t recognize yourself as antifascist, you’re still a comrade of mine.”

The risk, as always, is escalation. “The equivalent of black bloc street battles will happen online,” say Heidi Beirich, director of the Southern Poverty Law Center’s Intelligence Project. “Both sides will use every tool at their disposal to go after the other. Lord knows what they could pull off.” Online, actions earn not equal and opposite reactions but stronger ones— and the dial seems only to turn one way. 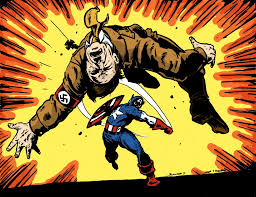