Smart move by Airbnb. Hopeful; the NAACP can help in vexing this natty problem…

Airbnb certainly can’t look to the DOJ for help- Indeed, it is likely the current DOJ leadership will come down on the side of the bigots.

And improve outreach to black communities

Airbnb and the NAACP announced a partnership today to promote the rental service’s platform in communities of color. The move is a way to both boost the sharing economy as an income stream for black Americans and help increase the diversity of hosts to curb discrimination. Airbnb has grappled for years now with racism on its platform, with hosts discriminating against people of color and other minorities both in the US and abroad when deciding who they permit to rent their homes or apartments.

In many cases, racist hosts will deny rental applications from black users or claim the property is booked on the selected dates, only to turn around and rent the property to a white user or leave the dates unbooked. In response to an increasing number of cases documented on social media, Airbnb user Quirtina Crittenden coined the hashtag #airbnbwhileblack last year. It quickly went viral, prompting an outpouring of personal accounts that quickly turned into an public relations nightmare for Airbnb.

This new measure, along with the added assistance of the NAACP, is a signal that Airbnb is continuing to take its fight against racism seriously. “Our fastest-growing communities across major US cities are in communities of color and we’ve seen how home sharing is an economic lifeline for families,” Belinda Johnson, Airbnb’s chief business affairs officer, said in a statement. “This partnership will build on this incredible progress. The NAACP is unrivaled in its tireless work to expand economic opportunities for minority communities and we look forward to collaborating with their talented team.”

As part of the partnership, the NAACP will help Airbnb target communities that could benefit greatly for home-sharing services and the tourism and additional income they provide. Airbnb will also gift 20 percent of its earnings from rentals in these communities to the NAACP, which will return the favor by aiding the company in its workplace diversity efforts. “For too long, black people and other communities of color have faced barriers to access new technology and innovations,” Derrick Johnson, the interim president and CEO of the NAACP, said in a statement. “This groundbreaking partnership with Airbnb will help bring new jobs and economic opportunities to our communities.”

For Airbnb, the existence of racism on its platform is both a PR disaster and a severe economic risk. Last year, the company narrowly avoided a potentially damaging racial discrimination case brought by Greg Selden. Selden, a black man, duped a racist host into accepting an application from a fake account with a white person’s photo after denying his original application, and he sued Airbnb claiming it violated the Civil Rights Act of 1964.

FOR AIRBNB, RACISM IS A HUGE MORAL AND ECONOMIC THREAT TO ITS BUSINESS

Thanks to a specific clause in its Terms of Service agreement, Airbnb was able to move that case to individual arbitration and avoid a class action suit. Nonetheless, the company released a new non-discrimination policy it calls “The Airbnb Community Commitment” back in October of last year that it makes hosts agree to, and it’s also ramped up efforts to weed out racist hosts and build better protections for users.

Despite those efforts, instances of flagrant racism continue to flare up on Airbnb and make international headlines. Earlier this month, a 26-year-old law clerk named Dyne Suh documented, in a video posted to YouTube, her interactions with host Tami Barker of Big Bear, California. Barker, upon learning that Suh was Asian-American, sent a series of racism-fueled texts saying she was canceling Suh’s reservation because of her ethnicity.

Airbnb promptly banned Barker, refunded Suh, and covered the cost of replacement accommodations, while the California Department of Fair Employment and Housing (DFEH) stepped in to fine Barker $5,000 and order that she take an Asian-American studies class. The DFEH now has the ability to investigate Airbnb hosts in California with more than three listings for racial discrimination following a landmark agreement with Airbnb in April.

Still, Airbnb can’t possibly regulate the behavior of every one of its hosts every hour of the day. A better solution, it appears, is to simply cater to communities where this discrimination doesn’t occur, and to increase the diversity of hosts to ensure more minorities feel comfortable using Airbnb when they travel.

Wow…They have charged this moron with attempted murder.

An Airbnb host in Amsterdam faced charges of attempts to murder after he pushed his South African guest down the stairs, which was captured by one of the victim’s friends, reports said Monday.

The victim, filmmaker Sibalhe Nkumbi, was in the city to review a friend’s art exhibition when the incident took place on Saturday.

The altercation took place while Nkumbi was checking out of her Airbnb lodging past her check-out time. This infuriated her woman host who asked them to leave immediately. Nkumbi said she and her friend apologized to the woman, who appeared to be angry about the inconvenience and left them alone to finish packing.

However, the woman returned with her husband, who Nkumbi said was extremely angry.

She said: “We knew that we were late and we heard a bell ring. We opened the door to this lady. She stated that this is not acceptable; you guys need to pack and leave now. And I was like, ‘Yes, give us a few minutes to pack,’ and I apologized profusely for us being late and we were getting ready to leave.”

“And that’s when she came back a few minutes later with the husband and he was banging the door,” Nkumbi added.

A video of the alleged assault was recorded and posted by Nkumbi’s friend Zanele Muholi on her Instagram account. Nkumbi also posted a video on YouTube explaining the entire incident.

Posted by btx3 on July 12, 2017 in International Terrorism, The Definition of Racism

This one has been getting a lot of air lately, as there has become increasing awareness of some racist Airbnb Hosts rejecting minority tenants based on their race/ethnicity.

While it is legal for the owner of a private residence to reject rental of their residence to whomever the choose, what is happening through Airbnb, may have different legal implications, in that the transaction crosses state lines, and as such may be subject to Federal Law, The following case might be a banner case with which to test the legal limits of the law relative to discrimination.

Airbnb host in North Carolina reportedly canceled on an investment banker after learning she was black and then attacked her with racial and sexist slurs.

In screen shots of a heated conversation sent to Bossip, Airbnb host Todd Warner accepts the reservation of an investment banker that needed temporary housing in Charlotte, and then hours later cited her race as the reason for canceling.

Shani C. Taylor, who identified herself as a friend of the woman, posted some of the conversation on Twitter. 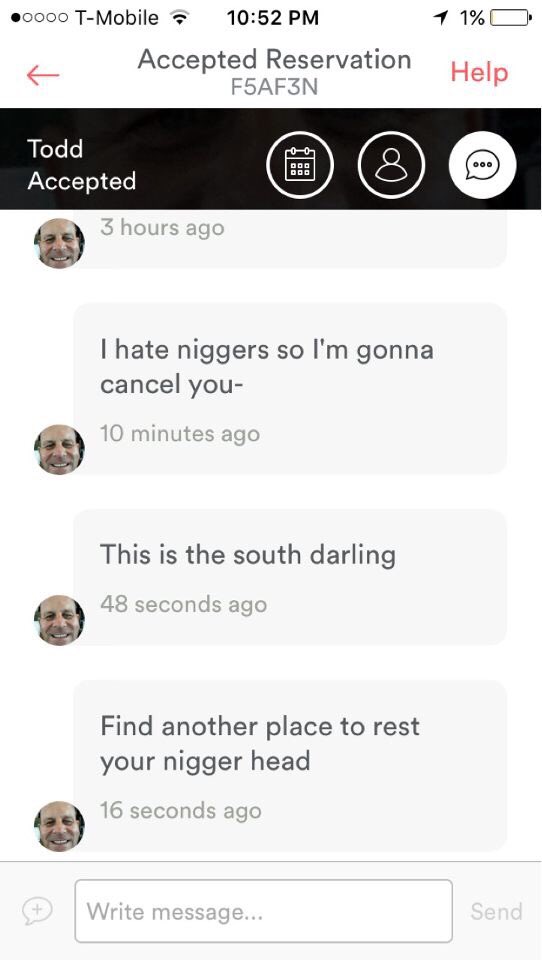 My friend and classmate here at Kellogg had a hateful and racist encounter with an @Airbnb host.

This was only one of several really awful remarks made by the host, Todd Warner. pic.twitter.com/F0mLHWZW2v

“I hate n*ggers so I’m going to cancel you,” Warner wrote. “This is the south darline. Find another place to rest your n*gger head.”

He added that he “wanted to f*ck” the woman’s “white friend.”

After threatening to report Warner to Airbnb, the woman explained that she was an investment banker with an MBA.

“So watch out,” she warned. “I might just buy the apartment/house next to you, and watch you squirm, you piece of shit.”

Warner fired back that he had retired with $22 million at the age of 44 because he was “not N*GGER like with my spending.”

Airbnb responded on Tuesday, saying that the company had contacted the host.

In recent months, Airbnb has come under fire for not screening out racists hosts.

Last year, the company defended itself after a Harvard study found that renters whose names sounded African-American were more likely to be rejected by Airbnb hosts.

“Airbnb is one of the most open, trusted, diverse, transparent communities in the world,” a spokesperson insisted to Bloomberg at the time. “We respond quickly to any concerns raised by hosts or guests, and we have a zero-tolerance policy for discrimination on our platform.”

Posted by btx3 on June 1, 2016 in Domestic terrorism, The Definition of Racism, The New Jim Crow

Not sure how this suit ties to Airbnb corporation, at least the way this article explains it, as the provider of rental space is the decision maker. The transaction is between the property owner and the prospective tenant.

Airbnb slapped with suit for alleged discrimination against black guests

An African-American man who claims he was subjected to race-based discrimination while using Airbnb slapped the company with a proposed class action in a Washington D.C. federal court Tuesday, alleging that the company has routinely violated the Fair Housing Act and the civil rights of people of color.

The complaint alleges that 25-year-old Gregory Seldon was denied accommodation in Philadelphia in March 2015 due to his race.

Court documents state that he was looking for housing while planning a weekend getaway with friends, and turned to Airbnb as a cost-friendly option. At the time, his Airbnb profile was linked to his Facebook, so it displayed his profile picture, race, education and age when he requested housing.

The complaint also claims that the company “shamed Selden for speaking out” when he complained about the discriminatory practices.

The host agent balked at his claims and instead told Seldon that “people like [him] were simply victimizing [himself],” according to court documents.

Seldon is seeking injunctive relief and unspecified damages as part of the class action.

This is not the first time Airbnb has been accused of not doing enough on discrimination.

Seldon’s story gained attention earlier this year when it helped inspire the viral hashtag #AirbnbWhileBlack, in which a flood of Twitter users shared stories about negative experiences using the house-sharing app and website.

For its part, Airbnb has emphatically denied that it condones racism or discriminatory practices. The company’s anti-discrimination policy states that it prohibits “content that promotes discrimination, bigotry, racism, hatred, harassment or harm against any individual or group, and we require all users to comply with local laws and regulations.”