The country is suffering under serial disasters from our first celebrity president.

One of the characteristics of Third World countries is the election of popular entertainers over solid politicians. Leading to even more misery as the woefully underprepared singer/actor/media type struggles not only with how the country’s government works – but the far more complex world of international relations and finance. Saw that in Haiti, and it is one of the big reasons the rebuilding effort and flow of international money into the country stopped.

There isn’t any need to go into the long term and possibly catastrophic damage of the Chumph.

To  fix that is going to take an experienced and steady hand. And it will take years if not a decade.

Yeah the Stock Market is at 25,000. What are you going to do when the inevitable “reset” comes and it drops to 12,000? A number of folks I have talked to in finance and investment think that is on the short term horizon.

So… What is Oprah bringing to the party? She is undoubtedly a very intelligent person with communications skill non pareil. But she knows absolutely nothing (just like the current POS in office) about the more complex international and strategic issues.

Oprah Winfrey’s speech on Sunday night at the Golden Globes pitched the worlds of politics, entertainment and media into fits of hysterical speculation. The television host and media titan delivered fist-pumping remarks after accepting the Cecil B. DeMille Award — the first African American woman honored with the Hollywood Foreign Press Association’s top laurel.

The comments, while straying away from outright political terrain, focused on changing the world order controlled by “brutally powerful men,” a reference to the sexual harassment scandals that have upset so many industries. “A new day is on the horizon,” she concluded to applause.

Almost immediately rallying cries spread online for a “Oprah 2020” presidential campaign. Winfrey’s longtime partner, Stedman Graham, told a Los Angeles Times reporter that “it’s up to the people,” adding “she would absolutely do it.”

But in a fictional way, an Oprah Winfrey White House has already happened. In 2006, the edgy cartoon “The Boondocks” predicted a Winfrey 2020 presidency. 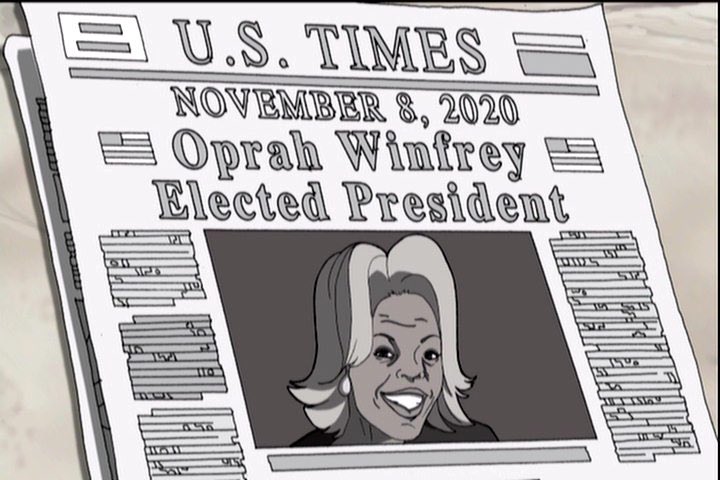 “The Boondocks,” the brainchild of artist and University of Maryland graduate Aaron McGruder, began as a syndicated comic strip in 1996 before jumping onto Cartoon Network as an animated show on the network’s lineup in 2005. Following the life of a young black family in a white neighborhood, McGruder’s work constantly bucked norms and pushed sensitive buttons.

The season one episode “Return of the King” was especially controversial. The program imagined an alternative history in which the Rev. Martin Luther King Jr. was not assassinated in 1968. Instead, he had fallen into a coma. In the episode he wakes up in 2000. King’s nonviolent views become so unpopular following the Sept. 11, 2001, terrorist attacks that he leaves to live in Canada.

The Rev. Al Sharpton, a civil rights activist and political commentator, was incensed by the program. “Cartoon Network must apologize and also commit to pulling episodes that desecrate black historic figures,” he said, USA Today reported at the time.

In the show’s final frames, a newspaper headline from November 8, 2020, shows Oprah Winfrey has just been elected president.

McGruder’s premise was likely not intended as a complete farce. In the past, the artist has talked about Winfrey’s real power. “Oprah has the power to lay waste to entire industries with a mere utterance,” he told the New York Times in 2005. “That’s a power that you have to respect. And ultimately I respect it.”

Oddly, there is a precedent of edgy cable cartoons successfully forecasting future political events. In 2000, “The Simpsons” broadcast an episode entitled “Bart to the Future.” The plot involved a President Trump.