Body Language Specialist – Obama Would Clock Perry in a Debate

Don’t think this is any surprise – Obama would wipe the floor with Rick Perry, and put a serious whuppin’ on any of the Republican candidates…

His pick as the best matchup? Neut Gingrich!

Just a little more than a year from the 2012 election, President Obama’s strapped with a wrecked economy, an uncooperative Congress and plenty of competition from the GOP. But when it comes to good old campaigning, communication expert Peter Meyers says Obama still has the golden touch.

“We can focus on the message all we want, the election doesn’t go to the candidate who’s the smartest or even the most experienced,” said Meyers, who has advised world leaders and politicians on how to use body language to influence their message. “It goes to the best communicator. Right now, in the White House, we’ve got a world class communicator. He is going to have to draw upon all of his skills, but he’d clock Rick Perry in a race.”

Meyers compares Obama to former Presidents Clinton and Reagan as speakers, both of whom won re-election after a stumbling start.

He’s not the only political adviser to suggest Obama’s got it in the bag. Whispers recently reported that Allan Lichtman, the American University professor whose election formula has correctly called every president since Reagan’s 1984 re-election, has Obama taking a second term.

Meyers doesn’t totally discount the other candidates, but doesn’t believe they have what it takes.

He admires Perry’s presidential look, his ability to deliver memorable zingers like “Ponzi scheme” and his clear, simple answers to tough questions. Meyers even finds his deep voice appealing. Yet, he admonishes Perry’s fashion sense and lack of poise when forced to speak off the cuff.

“He meanders mid-sentence and loses his way when someone kicks him off his talking points,” Meyers says. “His collars are way to high on his neck; he looks like Catholic school boy, whose mother dressed him for church.”

[See a collection of political cartoons about the GOP contenders.]

Mitt Romney doesn’t fare much better. “He can obviously stay on point and hold his own with Rick Perry, but his voice gets stuck in his throat instead of coming from his chest, and he tends to sound like a 1970s game show host; it’s inauthentic,” says Meyers.

Meyers also points to Romney’s stammer and rushed cadence as evidence of why he’d likely get trampled in a race against Obama. “He’s a fair fighter, and he is polished, but he’s almost like a community theater actor. When he makes a good point, you can see in his face that he’s very pleased with himself.”

Who does Meyers thinks might be able to knock Obama from his oratory pedestal?

“Newt Gingrich comes across as the best communicator the Republicans have got,” he says, “It’s a shame he doesn’t get mentioned more. When Gingrich speaks you can hear the tone of both his intellect and his heart; it’s like listening to a sleigh ride — very pleasant.”

Flash Mobs in the US… In France – Flash Cocktail Parties! Rachida Dati Announces 2012 Run for President

This also just in from Paris – Mayor (Paris 7th) Rachida Dati has announced her intention to run for President in 2012. Could Rachida be Europe’s Barack Obama? 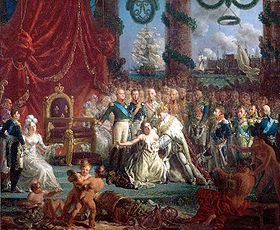 Parisian authorities are trying to stop a mass cocktail party organised over the Internet and planned for the Eiffel Tower grounds, after a reveller died on Thursday at a gathering of 10,000 people in western France.

The death was the first on record as a result of “Facebook aperitifs” — giant outdoor drinking parties whose popularity has exploded across France in the last six months and which are organised over the online social network.

The phenomena emerged last November in the western city of Nantes and rapidly spread to other cities. In past weeks reports of these mass parties have sprung up across France.

The Parisian “aperitif” was due on May 23 with a Facebook group having 15,000 people subscribed to the event, the biggest planned in France to date, according to Le Parisien newspaper.

The event was pulled from the website after police warned the organiser of the consequences of staging such a party. The maximum penalty for organising illegal events in France is six months in prison and a fine of 7500 euros ($A10,482).

The parties often turn into mass drinking binges, and police said the man who died on Thursday in the western city of Nantes had been drunk when he plunged head first over a parapet.

Paris Mayor Bertrand Delanoe said the parties risked spiralling out of control and were aimed at enticing a maximum number of people to drink alcohol in public places.

“We want to safeguard this site (Eiffel Tower)… It’s a great site, where more than 4 million tourists visit and we are protecting the residents,” Rachida Dati, mayor of Paris’s 7th district, location of the Eiffel Tower, told local television.

But the potential penalty hasn’t deterred partygoers. A new group entitled “All for the giant aperitif in Paris” administered by 30 people was up and running on Friday afternoon with more than 3800 already people signed up.

About Those Obama Poll Numbers

To hear conservatives tell it, President Obama’s poll numbers are dropping faster than some of our more published black conservatives to their knees…

When confronted with a white conservative with his pants unzipped.

Unfortunately for conservatives and Republicans, between the self inflicted political suicide by bimbos (conservative toast), and the general lackluster talent available in the conservative sphere…

That still doesn’t mean a Republican can win an election.

According to the latest Poll of potential candidates for the 2012 Presidential race – Obama led:

Newt Gingrich, former speaker of the House, by 18 points: 52 percent to 34 percent, with 15 percent undecided.

Meaning the Neutered One, and the Sno’ Ho’ don’t stand a Sno’ Ho’s chance in Hell .

As for Romney, non conservatives like him more than conservatives – who won’t vote for him because he’s a Mormon. Which in their view is “non-christian” and “Satan’s religion”.

Huckabee, at this point has to be the odd’s on favorite to be the Republican candidate sans another “Bimbo eruption” so seemingly common to the sanctimonious. This anti-conservative actually likes Huckabee (not enough to vote for him against Obama at this point), not the least because unlike many of his fellow conservatives…

He isn’t a racist asshat.