Another $10 Million for the Chumph’s Head

Get a few more of these and counter the Russian commie trolls who have turned tie white-wing into their little prison B*&*s.

Democratic mega-donor and billionaire environmentalist Tom Steyer is spending what an aide says is “well over $10 million” on a national TV adcampaign Friday calling for President Donald Trump’s impeachment.

The campaign is a bid by Steyer — who has not ruled out a run for office himself — to “demand that elected officials take a stand” on an issue Democratic leaders have so far largely avoided.

“A Republican Congress once impeached a president for far less. And today, people in Congress and his own administration know that this President is a clear and present danger who is mentally unstable and armed with nuclear weapons,” Steyer says in the ad, which largely features him speaking directly to the camera.
The ads are running on broadcast stations in New York and California and nationally on cable television. Accompanying the TV ads is what a Steyer aide said is a seven-figure digital ad buy intended to get the minute-long spot a large audience online.
Steyer is paying for the ads himself, and they are not part of his NextGen America political apparatus.
Instead, the ads point to a new website — NeedToImpeach.com — which features an open letter where Steyer takes clear aim at California Sen. Dianne Feinstein, citing — without using her name — Feinstein’s comment that Trump “can be a good President.” Feinstein has since downplayed the comment.
In the letter, Steyer hits Trump for ending protections for undocumented immigrants brought into the United States as children, for “actively sabotaging” Obamacare, and for “repealing clean air protections and unleashing polluters.”
“He has threatened to reduce aid for millions of American citizens in Puerto Rico who are struggling to survive without drinkable water or electricity — a move that would be a total dereliction of his duty. And every day, Americans are left bracing for a Twitter screed that could set off a nuclear war. These actions represent systemic attacks on our nation’s future,” Steyer writes.
Steyer is openly mulling a run in California’s primary against Feinstein next year. State Senate Democratic leader Kevin de León has already entered that race, challenging Feinstein from the left. Steyer has also considered running for California governor in 2018 or president in 2020.
Most Democrats have not yet publicly broached the subject of impeachment — though Reps. Al Green of Texas and Brad Sherman of California have each introduced articles of impeachment in the House, and Rep. Steve Cohen of Tennessee plans to do so.
Former White House chief strategist Steve Bannon warned Trump about the 25th Amendment, which allows a majority of the Cabinet to vote to remove a sitting president, Vanity Fair recently reported.

$10 Million to Impeach The Chumph!

Gettin’ hot in here! Larry Flynt, owner of Hustler Magazine and occasional political gadfly, has offered a $10 million reward for information resulting in the Impeachment of the Chumph.

Last time he did this during Bill CLinton’s impeachment, it wound up in ending the careers of about a half dozen Republicans, including Neut Gingrich and Bob Livingstone who were sucessive Speakers of the House who turned out to have sexual peccadilloes of their own.

This kind of money even boy toy Putin may finally release the “Pee Tape”!

Larry Flynt, the founder and publisher of Hustler magazine is offering a $10 million  reward for information leading to the impeachment of President Donald Trump.

Fox Anchor Liz Claman, who broke the story, tweeted an image of an advert for the money. Flynt himself subsequently retweeted the story. Hustler had not replied to a request for comment at the time of publication. 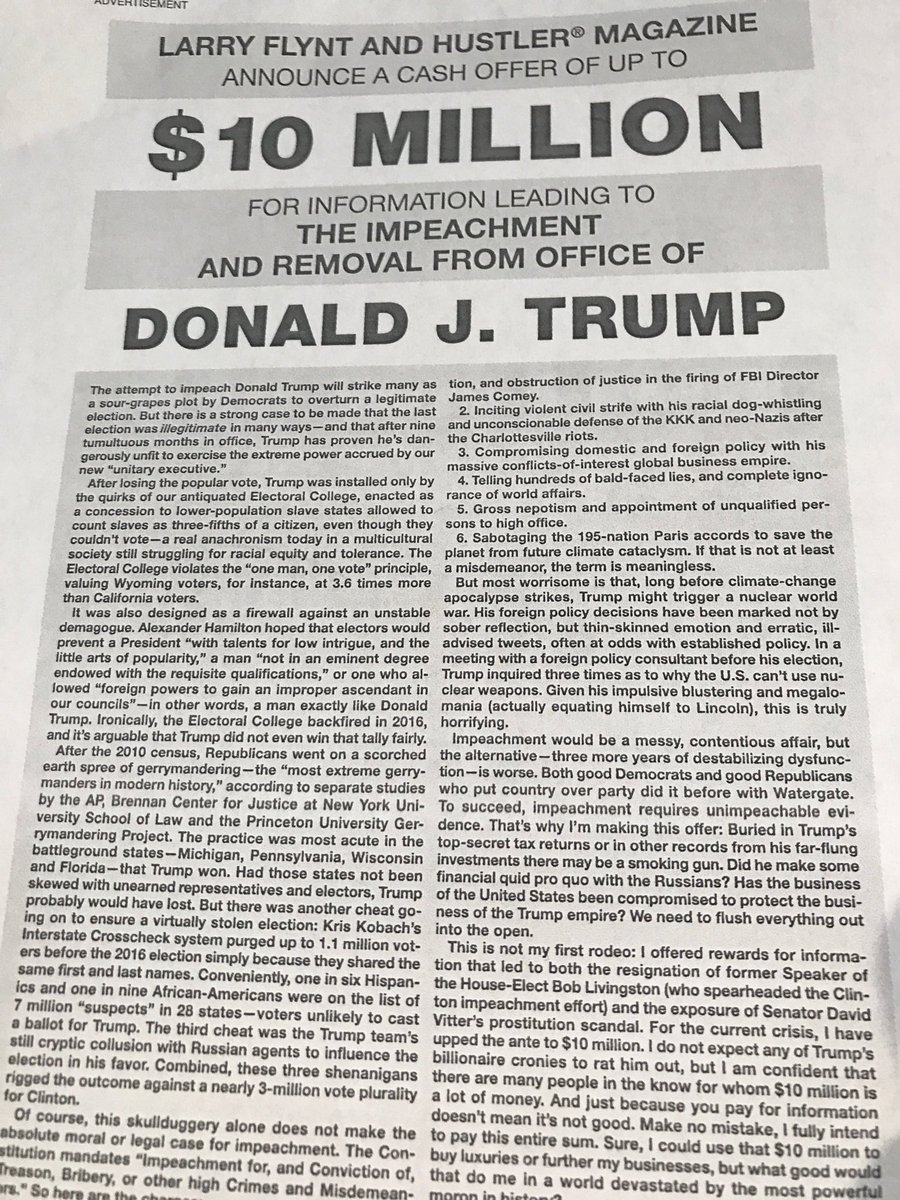 The advert says: “Buried in Trump’s top-secret tax returns or in other records from his far-flung investments there may be a smoking gun.”

“The attempt to impeach Donald Trump will strike many as a sour grapes plot by Democrats to overturn a legitimate election,” it continues.

“But there is a strong case to be made that the last election was illegitimate in many ways—and that after nine tumultuous months in office, Trump has proven he’s dangerously unfit to exercise the extreme power accrued by our new ‘unitary executive.’”

The full page advertisement says that Trump “only” won the election thanks to the “quirks” of the electoral college, which it calls “a real anachronism today.” It accused Republicans of a “scorched-earth spree of gerrymandering” after the 2010 census.

The advert says that Trump’s missteps include “inciting violent civil strife with his racial dog whistling,” “gross nepotism,” and “sabotaging” the Paris accord on climate change.

“Most worrisome is that, long before a climate change apocalypse strikes, Trump might trigger a nuclear world war,” it adds.

“Impeachment would be a messy, contentious affair,” the ad concedes, “but the alternative—three more years of destabilizing dysfunction—is worse.”

Flynt also offered a similar reward in 1998, during the impeachment trial of former President Bill Clinton. He has also shared clips from Hustler criticizing Trump, calling him a “buffoon” and a “narcissist,” and a piece calling on the Democrats to be “more than the party of no.”