Most pedopiles actually molest several hudred children before they are caught.I never is a “I did it once” for the Bill Cosby, Harvey Weinstein, Roy More type of serial molester/rapist – they harm dozens if not hundreds.

That the folks in Alabama are defending this scumbag is a national disgrace. General Sherman obviously burned the wrong state during the Civil War.

Another woman has charged Alabama Senate candidate Roy Moore of sexually assaulting her.

In an emotional news conference, Beverly Young Nelson said Moore groped her and tried to force her head onto his crotch in his car behind the restaurant where the then 16 year old worked.

McConnell made his remarks at a news conference in Kentucky. Moore has been accused of initiating sexual contact with a 14-year-old in 1979 when he was 32. Four other women have accused Moore of inappropriate contact when they were teens — one of whom came forward publicly on Monday.

McConnell had initially said last week Moore should end his candidacy “if” the allegations were true. McConnell had supported the incumbent senat

Luther Strange, in the primary. He said a write-in campaign for Strange is now “an option.”

Moore has come under increasing pressure from GOP lawmakers on Capitol Hill to step aside prior to the Dec. 12 special election in Alabama. He has refused, saying the accusations were “false and untrue” and threatening to sue The Washington Post, which first reported the storyon Nov. 9.

Moore responded to McConnell via Twitter, saying McConnell “has failed conservatives and must be replaced.” 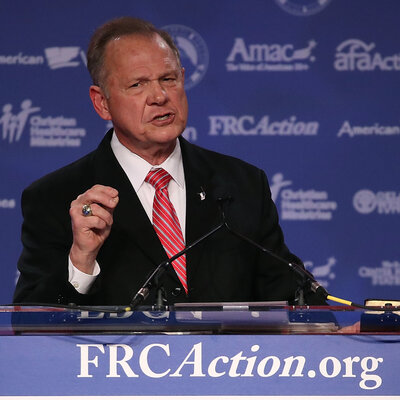 The person who should step aside is @SenateMajLdr Mitch McConnell. He has failed conservatives and must be replaced. #DrainTheSwamp

The National Republican Senatorial Committee has pulled out of a joint fundraising agreement with Moore, and the list of prominent Republicans opposing Moore’s candidacy has steadily grown.

The most recent is Maine’s Sen. Susan Collins, who in a statement on Twitter Monday said she “did not find Moore’s denials to be convincing.”

I have now read Mr. Moore’s statement and listened to his radio interview in which he denies the charges. I did not find his denials to be convincing and believe that he should withdraw from the Senate race in Alabama.

Republican leaders in Alabama, however, have largely defended Moore. Alabama State Auditor Jim Zeigler said there is “just nothing immoral or illegal” about the allegations and compared them to biblical marriages. The comments drew criticism from some evangelical leaders.

Meanwhile, Republican Gov. Kay Ivey has called the allegations against Moore “deeply disturbing,” but on Monday she said, “I will withhold judgment until we get more of the facts,” according to WSFA in Alabama.

Monday afternoon, another woman charged Moore with assaulting her. Beverly Young Nelson appeared at a news conference alongside attorney Gloria Allred. Nelson said when she was 16, Moore groped her and tried to force her head onto his crotch in his car behind the restaurant where she worked in Alabama.

Moore’s campaign chairman Bill Armistead released a statement calling Allred “a sensationalist leading a witch hunt,” adding that Moore “is an innocent man and have never had any sexual misconduct with anyone.”

“I believe the individuals speaking out against Roy Moore spoke with courage and truth, proving he is unfit to serve in the United States Senate and he should not run for office. If he refuses to withdraw and wins, the Senate should vote to expel him, because he does not meet the ethical and moral requirements of the United States Senate.”