Yet Another Case to Impeach the Chumph Traitorous POS

If the Chumph’s Republican collaborators in Congress were following the law and the Constitution. Of course, Republican white wingers really don’t give a damn about either.

Let’s hope that should there be a massive shift in elected officials in 2018, the the Democrats or Third Part folks who are elected don’t suffer any funcking delusions about “comity”, “bipartisanship”, or the fact the white wing gives a damn about America, and will lie, cheat, steal, and murder to maintain control. 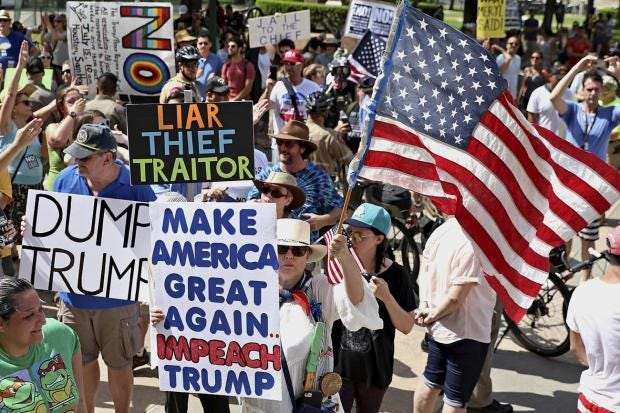 The commander in chief’s calls to abridge freedoms of speech and the press represent attacks on the Constitution he swore to protect and defend.

Whereas Donald J. Trump stood beneath American flags on the steps of the United States Capitol on January 20, 2017, placed his hand on a Bible, and spoke these words:

Whereas the Constitution of the United States reads in part, “Congress shall make no law respecting an establishment of religion, or prohibiting the free exercise thereof; or abridging the freedom of speech, or of the press; or the right of the people peaceably to assemble, and to petition the government for a redress of grievances.”

Whereas Trump has responded to news coverage he dislikes by advocating that the freedom of the press be abridged by bureaucrats and legislators; and by calling the press a public enemy and a target of his “drain the swamp” agenda.

Whereas Trump has responded to protected speech he dislikes by calling for a punitive government response and issuing commands to private citizens like a king or tyrant.

Whereas the aforementioned statements, individually or in aggregate, establish a clear pattern of failing to defend the Constitution and repeated attacks on its Bill of Rights.

Whereas it is a high crime to violate one’s sworn oath to the supreme law of the land.