Why is International Support for Harvey/Houston So Low?

After Hurricane Katrina over 150 foreign countries contributed or offered aid.

Under the Chumphshit…That has dropped to a trickle.

Yet another way the Chumphshit is destroying America.

Dozens of countries offered help after Hurricane Katrina. After Harvey, not so much.

In the wake of Hurricane Katrina, more than 150 countries offered volunteers, supplies and cash to the United States.

Mexico’s convoy of soldiers, all-terrain rescue vehicles and drinking water was followed by food, medical workers, water-treatment facilities and a kitchen that could feed 7,000 people daily.

The European Union sent satellites. In a statement, Mexico offered “help and coordination” to Harvey-ravaged Texas, though they didn’t go into specifics. It’s worth noting, too, that that same statement responded forcefully to a Twitter diatribe from President Trump, who once again demanded that Mexico pay for a border wall and threatened to “terminate” NAFTA. (The State Department has not said whether it will accept aid from Mexico. In a statement, it said “if a need for assistance does arise, we will work with our partners, including Mexico, to determine the best way forward.”)

Canadians are shipping supplies like baby bottles, formula and bath towels. Taiwan reportedly offered $800,000, and Venezuela promised $5 million. It’s unclear whether that funding would be accepted.

At a White House briefing, spokesman Thomas Bossert said that Mexican and Canadian leaders have called the president, but they didn’t discuss how those countries might help. “The president didn’t get into the specifics, and neither did the heads of state calling. So I think their primary purpose was to express and extend their prayers and their thoughts and their condolences to those that lost their lives,” he said.

Bossert also noted that the White House would turn over to FEMA and the State Department any “actual concrete” offers. FEMA did not return a request for comment. State directed questions to FEMA.

It’s possible that more offers of aid are forthcoming, and that countries are simply waiting to see how things play out. But Markos Kounalakis, a professor at Central European University, has a different theory about what’s going on.

“Maybe a distracted State Department experiencing attrition is unable to process foreign offers and aid. But it might also be that Trump actively alienates American friends and allies, boasts he is cutting USAID, and makes clear that America First translates into an aid policy of every nation for itself,” he wrote in an op-ed in the Miami Herald. “Countries seeking political payback, or simply eager to make a point, by sitting silent is a conceivable, if cruel, reaction to a White House that has been deliberately self-centered and dangerously provocative.”

There’s another possibility, too.

The United States struggled to make use of the foreign aid donated after Katrina. According to a 2011 Heritage Foundation report, just $115 million of the $850 million offered in Katrina relief was used. About $400 million of oil aid sat untouched. There were other snafus, too. Britain donated 400,000 ready-to-eat meals. But some contained beef, banned at the time because of fears of mad cow disease. So the food sat in a factory in Arkansas.

At one point, the State Department suggested that countries funnel their donations directly to organizations like the Red Cross, where they’d be put to better use.

At the time, the Bush administration explained things this way. “There is a process of matching needs with expertise and the donations that have been made,” State Department spokesman Sean McCormack explained to the Associated Press. Decisions about what to accept are based on need, he said, not politics. Germany’s high-speed pumps, for example, were eagerly accepted. Cuba’s offer of 1,100 doctors, not so much. 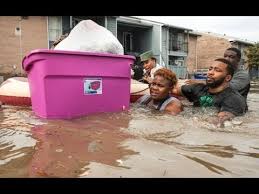