By the Constitution, a President’s pardoning power only extends to Federal Crimes…Not State crimes.

The Chumpshit’s veiled threat to pardon co-conspirators and criminal family members just got checked. Meaning the treasonous criminal Chumphshit can’t bribe his accomplices to keep their mouths shut in exchange for a pardon from him.

The initial charges that will bring down the Chumphshit will be filed in State Courts – specifically New York. Meaning the only legal escape for Manafort and other Chumphshit Cartel members will be through their legal defense. The New York AG who sucessflly prosecuted the Chumphshit in a Civil Case on his “Trump University” scam adds to an already powerful and skilled investigation team which now includes the top IRS people on financial fraud. Not to mention that there are likely some Patriotic volunteers who specialize in tracking down corporate criminals like the Chumphshit through international financial channels who can open doors the Feds normally can’t…

It appears Mueller is tightening the noose first by taking down the collaborators.

The Chumpshits next vacation at Rikers…

Robert Mueller just undercut Trump’s use of the pardon power

Politico reported Wednesday that special counsel Robert S. Mueller III is teaming up with New York Attorney General Eric Schneiderman in the investigation of former Trump campaign manger Paul Manafort. This is extremely bad news for Manafort and others at the center of Mueller’s broader investigation into the campaign.

Federal rules and Justice Department policy clearly provide for such cooperation and would even allow Mueller to share confidential grand jury information with Schneiderman’s office with court approval. Beyond that, there is always a great deal of information not covered by grand jury secrecy that could be freely shared. But although certainly not unheard of, federal and state prosecutors cooperating in an investigation is relatively unusual, at least in a white-collar case.

It’s unlikely that Mueller needs Schneiderman to charge crimes that Mueller otherwise couldn’t reach. Given the breadth of federal white-collar statutes, if Manafort’s financial dealings violated New York state law, they almost certainly could be charged under federal law as well. Federal charges such as mail and wire fraud, money laundering and RICO allow federal prosecutors to reach even transactions that took place entirely within one state.

The New York attorney general’s office is very highly regarded and has a history of bringing complex financial crime cases. It has been reported that Schneiderman’s office was already investigating Manafort for possible crimes related to his business dealings in New York. But the bottom line is that anything state prosecutors might be looking at, Mueller could also investigate on his own if he chose to do so. So why would Mueller join forces with Schneiderman?

One obvious reason is to pool resources. If Schneiderman’s office has already done work relevant to Mueller’s investigation, it makes sense to share that information rather than unearth it a second time. It’s also important for Mueller’s office to have access to things such as witness statements and testimony that the New York investigators may have already obtained.

But as others have noted, the second possible reason also explains why this news is so significant: It cuts the legs out from under any possible attempt by President Trump to use his pardon power to thwart the investigation.

Trump’s recent pardon of former Maricopa County (Ariz.) sheriff Joe Arpaio raised concerns that it might be seen as a signal to potential witnesses against him. They could refuse to cooperate with Mueller’s investigation and feel confident that Trump would pardon them if they ran into any legal trouble.

But the presidential pardon power extends only to federal crimes. Trump can’t do anything about New York state charges, and he can’t fire Schneiderman. The possibility of serious state charges gives Mueller’s team critical potential leverage that the pardon power threatened to take away… 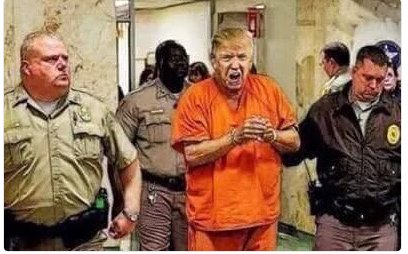 ← Why is International Support for Harvey/Houston So Low?
Bad Business Decision – David Duke →

3 responses to “Mueller Nullifies Chump Pardons of Criminals and Family”