Attempted Rise of the Third Klan Aided By the Chumph, Bannon…And Sessions

If the hot air in DC winds up with Sessions getting fired – I will jump for joy. Not the least of which reason being that the Chumph won’t get another pick at AG until the Mueller Report is out. 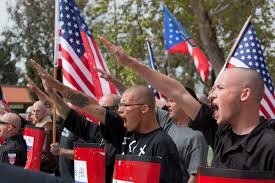 While the neo-fascist alt-right is not entirely happy with President Donald Trump’s first few months in office, one thing for which they are grateful is that the new administration is giving them free reign to engage in building their movement, completely unencumbered by any law enforcement scrutiny of their activities.

“He’s going to give us space to destroy,” Michael Peinovich, the creator of The Right Stuff, an alt-right podcast network said during a Sunday guest appearance on “Fash the Nation,” the movement’s most popular web radio show.

Peinovich, who also goes by the pen name “Mike Enoch,” was referencing a 2015 remark by Stephanie Rawlings-Blake, then the mayor of Baltimore, which some people interpreted as giving support to rioters who committed numerous acts of violence in the city following the acquittal of several police officers who had been on trial for the death of a black resident.

“He’s going to give us space to operate, and frankly, it is space to destroy,” Peinovich continued.

“Now is the time that we have to make hay while the sun shines . . . while these investigations of ‘domestic terrorist groups’ are not being funded by the government, they’re not being pushed by the Department of Homeland Security” argued one of the co-hosts of the program, an anonymous former Republican political staffer who calls himself Jazzhands McFeels.

We’d probably be facing fucking [racketeering] charges or some shit like that,” Peinovich said, discussing what he believed might have happened if Hillary Clinton had won the 2016 presidential election.

“We have to use these four years to grow into something that can’t be defeated,” Peinovich said, referring to possible future investigations of neo-fascist groups.

Some parts of the Trump administration actively want to encourage the growth of the alt-right, the former Hill staffer “Jazzhands McFeels” said, claiming that Trump’s top strategist Steve Bannon secretly was trying to enable the fringe movement.

“They kind of expect us to be doing this. I’m not saying he’s our guy, but they want — at least Bannon, I would think — wants us to be able to operate in that space. So we should and we are,” he said.

Both podcasters’ statements were met with agreement by guest Richard Spencer, an alt-right editor who operates a series of niche web publications and conferences catering to self-styled racist intellectuals who has since tried to rebrand himself as more of an activist.

In 2016, Bannon told Mother Jones writer Sarah Posner that Breitbart News, the website he oversaw before going to work for Trump, was “the platform for the alt-right.” Subsequently, the White House strategist claimed that he was referring to the anti-Washington ethos that permeates the larger Republican base.

As a matter of policy, the Department of Justice and the Federal Bureau of Investigation do not publicize ongoing investigations but presumably, given how tightly knit the small alt-right movement is, the two podcasters likely have some knowledge about the lack of law enforcement oversight.

One government policy area which does appear to have changed under Trump is that federal grants to non-profit groups seeking to combat domestic extremism appear to have been frozen by the new administration.

Those funds were to be disbursed under a program called Countering Violent Extremism which was approved by the GOP Congress and former president Barack Obama in January of this year.

In February, Reuters reported that the Trump administration had decided to take the $10 million budget of the program, which was supposed to be given to private-sector groups trying to discourage extremism of all types, and redirect it toward counteracting Islamist influence only. The program itself would be renamed the “Countering Radical Islamic Extremism” initiative, according to the wire service. Since that time, several nonprofit groups which had been approved for funding allocations have publicly stated that they have not received any information from the federal government, despite the fact that the money was supposed to be disbursed within 30 days of approval.

“I hope the way that he [Trump] is looked back on in history is that he was the vehicle that moved the alt-right movement, the white identity movement in the United States, back into the forefront of the political scene,” Peinovich said on the podcast.

While he is not as widely covered in the political press as some other alt-right activists, Peinovich’s “The Right Stuff” podcast network currently hosts over a dozen neofascist web radio shows that in total have hundreds of thousands of downloads every week, far in excess of the audience of the some nationally syndicated radio hosts’ podcasts.

The Right Stuff has begun recovering some of its audience after Peinovich was exposed in January as having a Jewish wife. His business partner claimed after he was “doxxed” that Peinovich was “separating” from her but neither activist has ever offered any proof of the assertion.

One response to “Attempted Rise of the Third Klan Aided By the Chumph, Bannon…And Sessions”