With the threat of being accosted on any street corner or being assaulted by a Chumph racist bigot while minding their own business…Can you blame them? 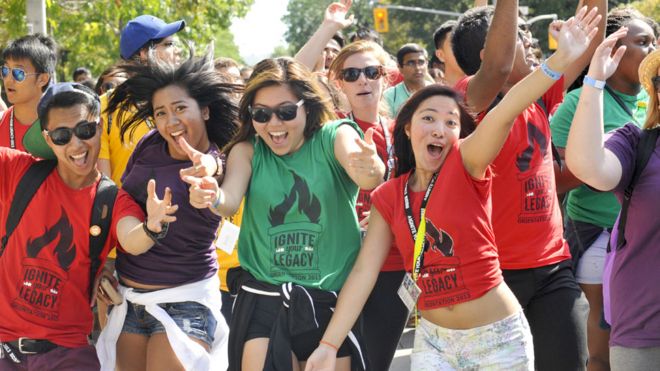 Canadian universities are seeing a surge in applications from overseas students, with the country’s liberal, migrant-friendly image appearing to be an important attraction.

Students who might once have headed for the United States now seem to be reconsidering and seeing Canada as a North American alternative.

The University of Toronto, one of Canada’s top-ranked universities, has seen interest rising sharply, including a 57% increase in applications from India.

This interest has converted into acceptances, says the university – with an overall 20% increase in overseas students accepting places for the autumn.

Wilfrid Laurier University says it has had a 32% increase in overseas students and McMaster University has seen an annual rise of 33%.

But Canadian universities are seizing an opportunity from the Trump administration in the US and the Brexit vote in the UK to present themselves as a more outward-looking alternative.

There are more than 350,000 overseas students already in Canada, with research from the Canadian Bureau for International Education suggesting that the image of a “tolerant and non-discriminatory society” is a major attraction.

Perception is a powerful force in this market and Canadian universities are contrasting their warmer welcome to international students with the tough messages on immigration being transmitted by the Trump administration.

The University of Montreal has set up its own travel fund for its international students who would once have attended conferences in the US, but now face difficulties getting into the country.

An Iranian student who says he spent two hours being “interrogated” at a US airport was among those who would be funded to go to conferences elsewhere.

Professor Ted Sargent, responsible for the University of Toronto’s international outreach, says the response of overseas students to such changes in the US has been to “go back to first principles”.

“Events in the US and the UK have reverberated around the world,” he says. “It makes people go back and think again.”

Canada can offer top-ranked universities, he says, but the country is also sending a “message about being open to the world”.

Prof Sargent says that half of the population of Toronto is non-Canadian born and that Canada’s strategy has been to “attract the brightest and the best” from around the world.

A spokeswoman for the University of Montreal says: “Of course, it is also difficult to ignore what is going on south of our border.

“The US political climate might indeed be one reason why more students are choosing to come to Montreal and Canada generally.”

The idea of an “open and welcoming city” has a strong appeal to students coming to Montreal, she says.

“They can have a North American study experience here, in a safe environment.”

This year saw Montreal getting top place in the QS Best Student Cities rankings, replacing Paris which had been in first place for the four previous years.

Among the measures were Montreal’s access to employers, safety, pollution, desirability for student life and sense of tolerance.

Another advantage for this part of Canada is that it can offer courses in both English and French.

There is also a rising stream of US students heading to Canada.

Apart from any political considerations, those heading over the border will also be attracted by tuition fees, which can be cheaper for US students than studying at home, even at overseas student rates.

But the US university system remains a powerful magnet for overseas students, with numbers rising to more than a million students last year, with almost 330,000 from China alone.

This annual increase, up by about 7% in 2016, was valued as being worth another £3bn to the US economy.