The reason Republicans won’t move to impeach the Chumph is a lot of them are involved in Treason as well. More than just the Chumph are sold out to the Russians.

GOP Lawmaker Got Direction From Moscow, Took It Back to D.C.

After being given a secret document by officials in Moscow, Rep. Dana Rohrabacher sought to alter sanctions legislation and tried to set up a virtual show trial on Capitol Hill.

Members of the team of Russians who secured a June 2016 Trump Tower meeting with Donald Trump Jr. and Jared Kushner also attempted to stage a show trial of anti-Putin campaigner Bill Browder on Capitol Hill.

The trial, which would have come in the form of a congressional hearing, was scheduled for mid-June 2016 by Rep. Dana Rohrabacher (R-CA), a long-standing Russia ally who chairs the House Foreign Affairs Subcommittee on Europe. During the hearing, Rohrabacher had planned to confront Browder with a feature-length pro-Kremlin propaganda movie that viciously attacks him—as well as at least two witnesses linked to the Russian authorities, including lawyer Natalia Veselnitskaya.

Ultimately, the hearing was canceled when senior Republicans intervened and agreed to allow a hearing on Russia at the full committee level with a Moscow-sympathetic witness, according to multiple congressional aides.

An email reviewed by The Daily Beast shows that before that June 14 hearing, Rohrabacher’s staff received pro-Kremlin briefings against Browder, once Russia’s biggest foreign investor, and his tax attorney Sergei Magnitsky from a lawyer who was working with Veselnitskaya.

Although House Foreign Affairs Committee chairman Ed Royce (R-CA) had prohibited Rohrabacher from showing the Russian propaganda film in Congress, Rohrabacher’s Capitol Hill office still actively promoted a screening of the movie that was held at the Newseum in Washington, D.C., on June 13, 2016. Veselnitskaya was one of those handling the movie’s worldwide promotion.

Invitations to attend the movie screening were sent from the subcommittee office by Catharine O’Neill, a Republican intern on Rohrabacher’s committee. Her email promised that the movie would convince viewers that Magnitsky, who was murdered in a Russian prison cell, was no hero.

The invite, reviewed by The Daily Beast, claimed that the film “explodes the common view that Mr. Magnitsky was a whistleblower” and lavishes praise on the “rebel director” Andrei Nekrasov.

“That invitation was not from our office. O’Neill was an unpaid intern on the committee staff. Paul denies asking her to send the invitations,” said Ken Grubbs, Rohrabacher’s press secretary, referring to the congressman’s staff director, Paul Behrends.

O’Neill went on to secure a job on the Trump transition team and then in the State Department’s Office of the Under Secretary for Civilian Security, Democracy, and Human Rights. She did not return a call for comment.

Rohrabacher’s office was given the film by the Prosecutor General’s office in Moscow, which is run by Yuri Chaika, a close associate of President Vladimir Putin who is accused of widespread corruption, and Viktor Grin, the deputy general prosecutor who has been sanctioned by the United States as part of the Magnitsky Act.

That same Prosecutor General’s office also was listed as being behind the “very high level and sensitive information” that was offered to Donald Trump Jr. in an email prior to his now infamous meeting with Russian officials at Trump Tower on June 9—just days before the congressional hearing. Veselnitskaya attended that meeting with Trump Jr. She also happens to have worked as a prosecutor in the Moscow region and is a close personal friend of Chaika.

The Daily Beast reviewed a copy of a document that was passed to Rohrabacher in Moscow in April 2016. The document, marked “confidential,” was given to Rohrabacher and Behrends. It lays out an alternate reality in which the U.S.—and the rest of the world—has been duped by a fake $230 million scandal that resulted in sanctions being imposed on 44 Russians linked to murder, corruption, or cover-ups.

The document, which was handed over by an official from the Prosecutor General’s office to Rohrabacher along with means of viewing the Russian propaganda movie, suggested that U.S. “political situation may change the current climate” and claimed that it was the ideal moment to foment a challenge to the Western narrative on Putin’s kleptocracy. A subcommittee hearing that would re-examine the sanctions placed on Russia, the paper claimed, would be appreciated in Moscow.

“Changing attitudes to the Magnitsky story in the Congress… could have a very favorable response from the Russian side,” the document said.

What the U.S. would get in exchange for holding a subcommittee hearing was not laid out in detail. But the document promised to help iron out “key controversial issues and disagreements with the United States.”

Grubbs said Rohrabacher had accepted the document but said the conversation with officials from the Prosecutor General’s office during the congressman’s April 2016 Moscow visit was “brief and formal.” When Rohrabacher returned to the United States, he delayed the passage of the Global Magnitsky Act by holding it up in committee and tabled an amendment to remove Magnitsky’s name from its title, citing several of the claims found in the Russian document.

Next, Rohrabacher and Behrends, with the help of Rinat Akhmetshin, a Soviet army veteran and lobbyist who was also present at the June 9 Trump Tower meeting, put together a subcommittee event with witnesses including Veselnitskaya and Nekrasov, the director of the movie.

When Royce, the chair of the foreign relations committee, got wind of the hearing, he nixed Rohrabacher’s plan and offered instead to hold a full committee hearing on Russia relations. House aides conceded that he did so, in part, to avoid Rohrabacher staging an event that could have embarrassed the Republican Party—and Congress.

Rohrabacher was apparently still allowed to propose a witness for the full committee hearing who shared some of his pro-Russia views. Jack Matlock, the former U.S. ambassador to the Soviet Union who appeared, confirmed to The Daily Beast that he had been first approached by Rohrabacher.

A spokesman for Royce said that while Matlock and Rohrabacher did know each other from their days in the Ronald Reagan administration, his appearance at the hearing was ultimately cleared by the full committee’s Republican staff.

During Royce’s hearing, Rohrabacher approvingly compared Donald Trump to Vladimir Putin. The congressman also submitted, for the congressional record, testimony that claimed Russia had not been behind the radioactive poisoning of former FSB officer Alexander Litvinenko in London.

Rohrabacher, Behrends, Akhmetshin, Veselnitskaya, and Matlock had dinner together later that night at the Capitol Hill Club, a private members’ establishment for Republicans. The evening was organized by Lanny Wiles, a veteran GOP operative.

The following day, House Majority Leader Kevin McCarthy was caught on tape telling Republican colleagues: “There’s two people I think Putin pays: Rohrabacher and Trump.” When some of the lawmakers laughed, he replied: “Swear to God.”…More… 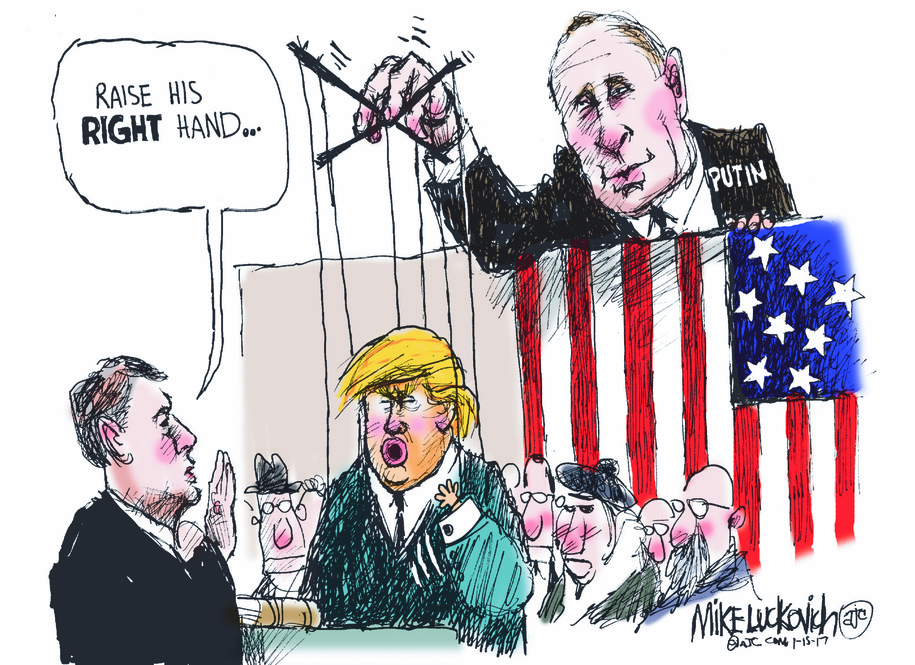