Stuck on Stupid – When Reading the Declaration of Independence is Treason

Fortunately the judge had finished at least High School and immediately recognized the document.

The reality dysfunction between Chumph supporters and normal people is about as real as it gets. It seems less and less every day that the national crisis is going to be solved by any sort of logical conversation and will devolve into violence. Variously attributed to  a number of people, including Ben Franklin and Thomas Jefferson

“You can’t reason a person out of any position that reason didn’t get them into in the first place.” 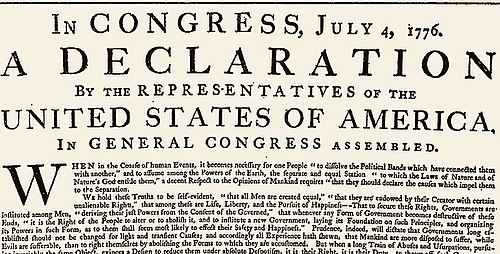 ‘Calling for a revolution!’: Trump fans ‘triggered’ after NPR tweets out the Declaration of Independence

For 29 years, National Public Radio’s “Morning Edition” has celebrated the Fourth of July with a reading of the Declaration of Independence by hosts, reporters, newscasters and commentators.

After NPR tweeted the accompanying text of the declaration line by line, Donald Trump backers (seemingly unaware of the source document) accused the media organization of playing partisan politics and attacking the president.

“So, NPR is calling for a revolution,” Twitter user @JustEsrafel wrote.

“Propaganda is that all you know?” another asked.

Some even taunted NPR over Trump’s budget proposal, which slashes endowments for the arts and humanities, insisting the media organization should lose federal funding for its subversive rhetoric.

A Prince whose character is thus marked by every act which may define a Tyrant, is unfit to be the ruler of a free people. 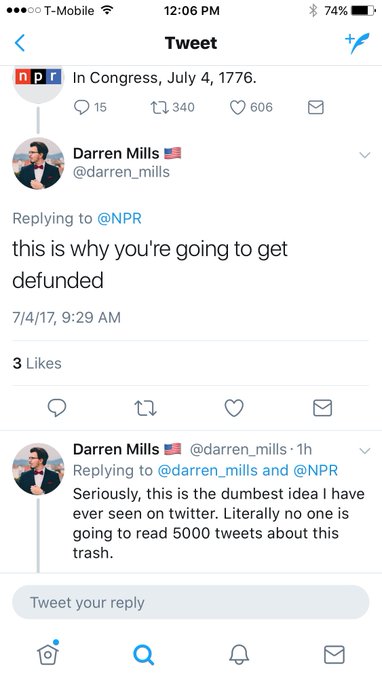 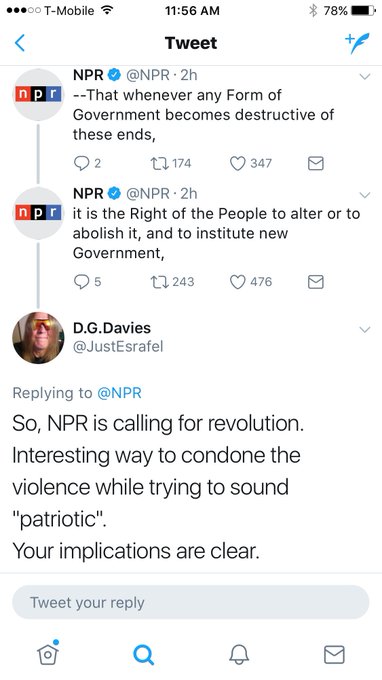 @NPR When you’re triggered by the Declaration of Independence bc you want so badly to submit to King Donald the Doll-Handed…. pic.twitter.com/aEyLEu24Qc 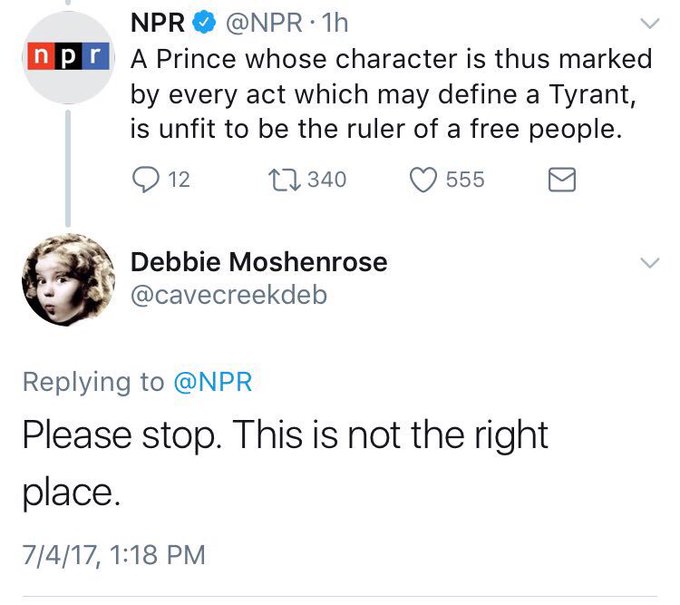 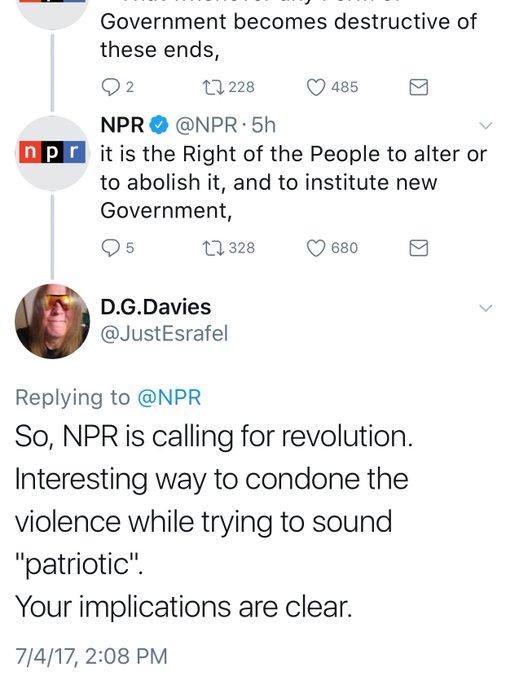 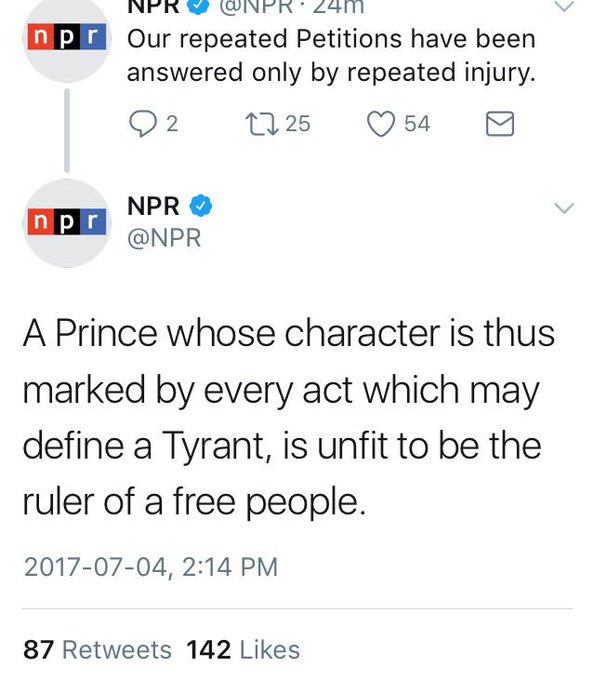 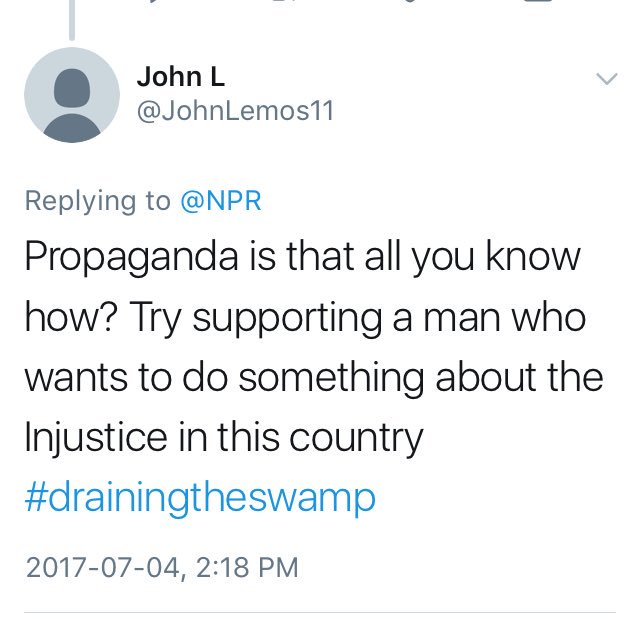 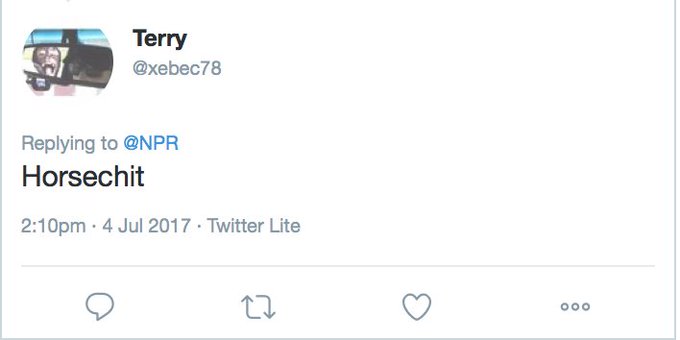 A bunch of Trump supporters became irate this morning when NPR started tweeting excerpts of the Declaration of Independence. Bless them. https://twitter.com/spookperson/status/882347581862420481 …

The Declaration of Independence was originally written by Thomas Jefferson, and was adopted by the Second Continental Congress on July 4, 1776. It laid out the 13 colonies’ intention to separate from the Kingdom of Britain and form an independent union. It is not a partisan document.

Posted by btx3 on July 5, 2017 in Daily Chump Disasters, The Clown Bus, The Post-Racial Life