How the White Evangelical Church…Stays White

And no – a black (or minority) is not going to go to a Church where support for Trump is part of the package when they know full well that Evangelical support for the CHumph is a lot more about racism than religion. 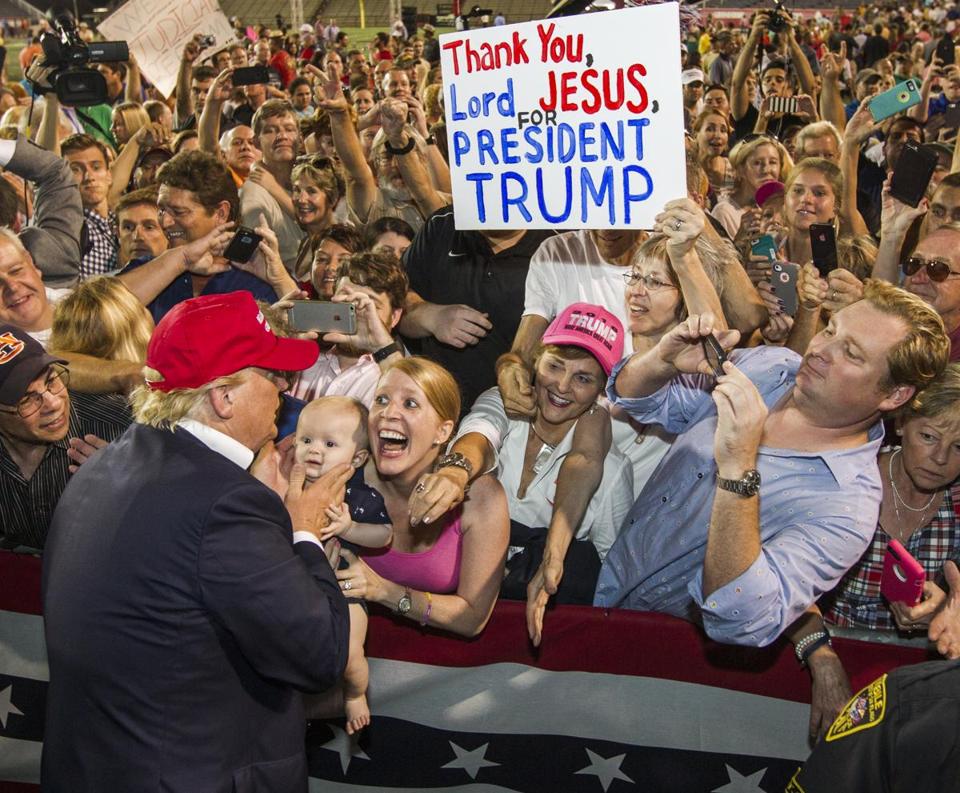 …“We need more diversity on that stage!” and “What about that one minority guy? Can we get him to do announcements?”

Crist’s sketch functions as a reminder of the fact that, as Dr. Martin Luther King once famously remarked, the eleven o’clock hour on Sunday morning is the most segregated hour of American life. Despite all that’s occurred over the past 50 years in the culture more broadly, and all the Christian hand-wringing, American churches have remained largely segregated. And, while many have sought more benign explanations, others have spoken for quite some time, albeit in hushed voices, about the racial gatekeeping that persists in much of white Christian America.

Talk of gatekeeping was largely anecdotal, until now. In a recent study called “‘Race Tests’: Racial Boundary Maintenance in White Evangelical Churches,” published by Sociological Inquiry, researchers Glenn E. Bracey, II and Wendy Leo Moore sought to reveal how evangelical religious organizations, many of which claim to be open, remain so heavily segregated.

Bracey and Moore hypothesize that these ecclesial organizations perform a “race test” on incoming persons of color that manifest as anything from micro-aggressions to outright overtures of racial stereotypes, in effect seeing “whether the people of color are willing to serve the interests of whites in the space, or execute exclusionary race tests to coerce people of color into leaving the space.”

To turn on the TV and watch the telecasts of churches, it’s easy to see that most churches have a super-majority of one race or ethnicity. While many of the church-going population have no problem acknowledging tendencies toward racial segregation in voluntary groups, this new study shows that there is a toxic combination of unintentional and intentional behaviors that are keeping white evangelical churches mostly white.

The researchers introduce the notion that these white evangelical churches have created what they call “white institutional space.”

Bracey, who is African American, ventured into seven churches and attempted engagement in numerous ways. In one of the more passive micro-aggressions, on an early visit, a white congregant whom he’d been emailing with, immediately introduced him to a black mother and her apparently biracial child. The lady even slipped, saying “I’ve been praying that God would send a bla—, a man, that could step in and be a father figure to this child.” One of the other examples was a trip to a small group meeting where pictures of Confederate soldiers were proudly displayed and where the homeowner spoke of the “heroism and hardships of his Confederate ancestors.” Bracey left the meeting quickly, faking an emergency.

Each interaction Bracey had with church members seemed to get decidedly worse than the previous one, as if there were a level of intentionality to maintaining white exclusivity. The study delineated between utility-based race tests and exclusionary race tests. The former is where one’s entry is pre-conditioned, based on how the white institutional space expects a person of color to behave; while the latter functions as a bolder macro-aggressive statement, outwardly expressing sentiments of exclusion. One of the macro-aggressive examples occurred during a small group session at a congregant’s house, when one member of the group made a reference to his “China Gun”—because of the “chink chink” sound it makes when being cocked. He then proceeded to point his imaginary gun at a Latino participant and the researcher.

There are some deeper theological and ecclesiastical questions that are triggered by this study, including: how does evangelical Christianity propagate white institutional spaces so well? Most protestants have left behind the iconography that depicted Jesus as a medium-to-small-framed white guy with either blond of brown hair wearing a robe. But, as contemporary churches designed new sanctuary spaces, with massive stages replacing traditional pulpits, the actors on the stage replaced the icons. Effectively, then, “Jesus” was still a medium-to-small-framed white guy with either blond or brown hair. When the representation of holiness—in pastors, lay leaders and worship leaders—is still overwhelmingly white, it will consistently perpetuate white institutional space. The tokenization of persons of color in the worship bands merely adds fuel to the machine of white institutional spaces; that persons of color can only function for minstrel entertainment purposes.

The failure of ecclesiastical white institutional spaces to find ways to bridge the gap across racial and ethnic boundaries draws a direct correlation to the persistent reluctance of white Christians to accept a gospel message from anyone but another white person—usually a male. Recall, then-candidate Barack Obama’s pastor, Rev. Jeremiah Wright, and the numerous denouncements from the Christian right and moderates about how black liberation theology was heretical and separatist in nature. The distinct incapacity to accept another lived reality as it encounters the Gospel of Jesus is the breathing apparatus that gives life to white institutional spaces that are, as Bracey and Moore put it: “normatively white in policy and practice by explicitly accounting for the intersecting mechanisms—structure, culture, ideology, and discourse—that justify and reproduce white privilege, power and accumulation of resources in these institutions.” In other words: white is, and will continue to be, right.

Recently, here on RD, Deborah Jian Lee reported on the ways in which persons of color are pressured to perform to standards of whiteness in evangelical spaces. She writes that “for those staying, they must contend with a dominant white theology shaped in the cauldron of privilege…. It fails to recognize how unfair policies and societal structures harm the economic and social wellbeing of those subject to those systems.” Her article is bookended by the story of a person of color, pastor George Mekhail, who ultimately chose to leave evangelicalism. Unfortunately, that’s the choice that many face: stay and try to fight an uphill battle or leave and let the chips fall where they may.,,,The Rest Here…

One response to “How the White Evangelical Church…Stays White”