Majority of Under 30 See the Chumph as Illigitimate

The Chumph is an Illegitimate POS, who should be tried for Treason, and if convicted…Hung. Just like Saddam Hussein. 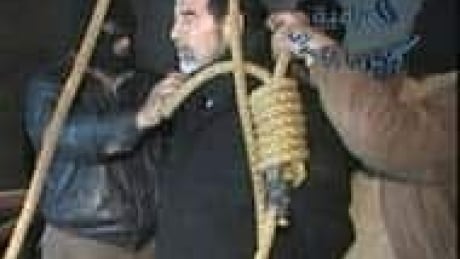 What we need to do with our traitor… After a fair trial and conviction, of course.

Majority of young adults in US view Trump’s presidency as ‘illegitimate’: poll

A new poll says that the majority of Americans between the ages of 18 and 30 view Donald Trump as an “illegitimate president,” according to TheHill.com.

“The GenForward poll reported by The Associated Press found that 57 percent of young adults see Trump’s presidency as illegitimate, including three-quarters of black respondents and large majorities of Latinos and Asians,” wrote Brooke Seipel on Saturday.

The poll showed that 53 percent of white young American adults feel that Trump occupies the Oval Office legitimately, but 55 percent of those respondents rated his job performance negatively.

A meager 22 percent of young adults approve of the president’s job performance with 62 percent disapproving.

The poll included 1,833 respondents queried between Feb. 16 and Mar. 6. It was conducted by the Black Youth Project at the University of Chicago in collaboration with The Associated Press-NORC Center for Public Affairs Research.

Polls show that many millennials are more progressive than their parents’ generation and identify as liberal much more readily than Americans over 40.