The Agricultural industry in the US collapses.

Despite incessant whining by the white right snowflakes of flyover country…There just aren’t going to be any white folks out there picking cotton as long as they can get a welfare check, Even if you raise the pay to be competitive with other work.

Tell me again “who” is exactly unwilling to work for a living? 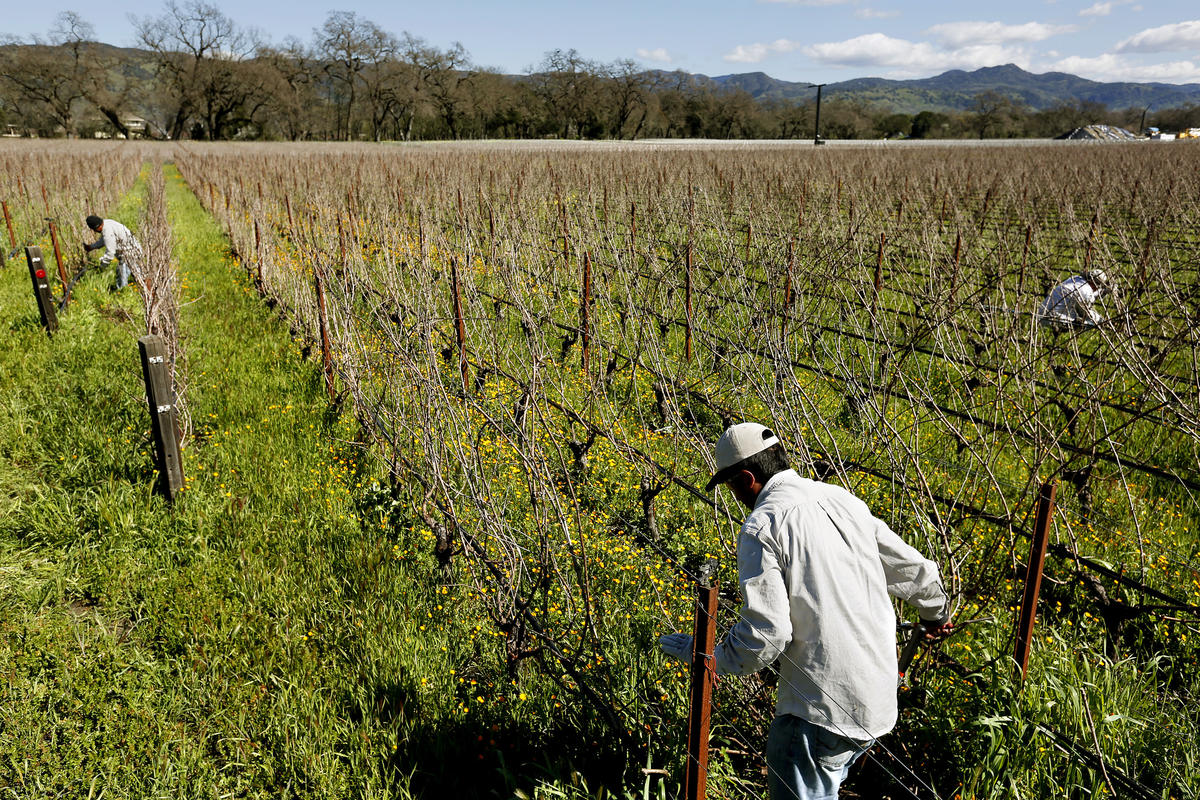 Arnulfo Solorio’s desperate mission to recruit farmworkers for the Napa Valley took him far from the pastoral vineyards to a raggedy parking lot in Stockton, in the heart of the Central Valley.

Carrying a fat stack of business cards for his company, Silverado Farming, Solorio approached one prospect, a man with only his bottom set of teeth. He told Solorio that farm work in Stockton pays $11 to $12 an hour. Solorio countered: “Look, we are paying $14.50 now, but we are going up to $16.” The man nodded skeptically.

Solorio moved on to two men huddled nearby, and returned quickly. “They were drug addicts,” he said. “And, they didn’t have a car.”

Before the day was through, Solorio would make the same pitch to dozens of men and women, approaching a taco truck, a restaurant and a homeless encampment. Time was short: He needed to find 100 workers to fill his ranks by April 1, when grapevines begin to grow and need constant attention.

Solorio is one of a growing number of agricultural businessmen who say they face an urgent shortage of workers. The flow of labor began drying up when President Obama tightened the border. Now President Trump is promising to deport more people, raid more companies and build a wall on the southern border.

That has made California farms a proving ground for the Trump team’s theory that by cutting off the flow of immigrants they will free up more jobs for American-born workers and push up their wages.

So far, the results aren’t encouraging for farmers or domestic workers.

Farmers are being forced to make difficult choices about whether to abandon some of the state’s hallmark fruits and vegetables, move operations abroad, import workers under a special visa or replace them altogether with machines.

Growers who can afford it have already begun raising worker pay well beyond minimum wage. Wages for crop production in California increased by 13% from 2010 to 2015, twice as fast as average pay in the state, according to a Los Angeles Times analysis of data from the Bureau of Labor Statistics.

Today, farmworkers in the state earn about $30,000 a year if they work full time — about half the overall average pay in California. Most work fewer hours.

Some farmers are even giving laborers benefits normally reserved for white-collar professionals, like 401(k) plans, health insurance, subsidized housing and profit-sharing bonuses. Full-timers at Silverado Farming, for example, get most of those sweeteners, plus 10 paid vacation days, eight paid holidays, and can earn their hourly rate to take English classes.

But the raises and new perks have not tempted native-born Americans to leave their day jobs for the fields. Nine in 10 agriculture workers in California are still foreign born, and more than half are undocumented, according to a federal survey.

Instead, companies growing high-value crops, like Cabernet Sauvignon grapes in Napa, are luring employees from fields in places like Stockton that produce cheaper wine grapes or less profitable fruits and vegetables.

Growers who can’t raise wages are losing their employees and dealing with it by mechanizing, downsizing or switching to less labor-intensive crops.

Jeff Klein is doing all of the above. Last year Klein, a fourth-generation Stockton farmer, ran a mental ledger, trying to sort out the pros and cons of persevering in the wine business or quitting. He couldn’t make the math work.

Wineries pay Klein a tiny fraction of what they pony up for the same grape variety grown in Napa, and the rising cost of labor meant he was losing money on his vineyards. So in October, Klein decided to rip out 113,000 Chardonnay grapevines that once blanketed land his family has owned for decades. Now they lay heaped into hundreds of piles, waiting to be taken to the dump. 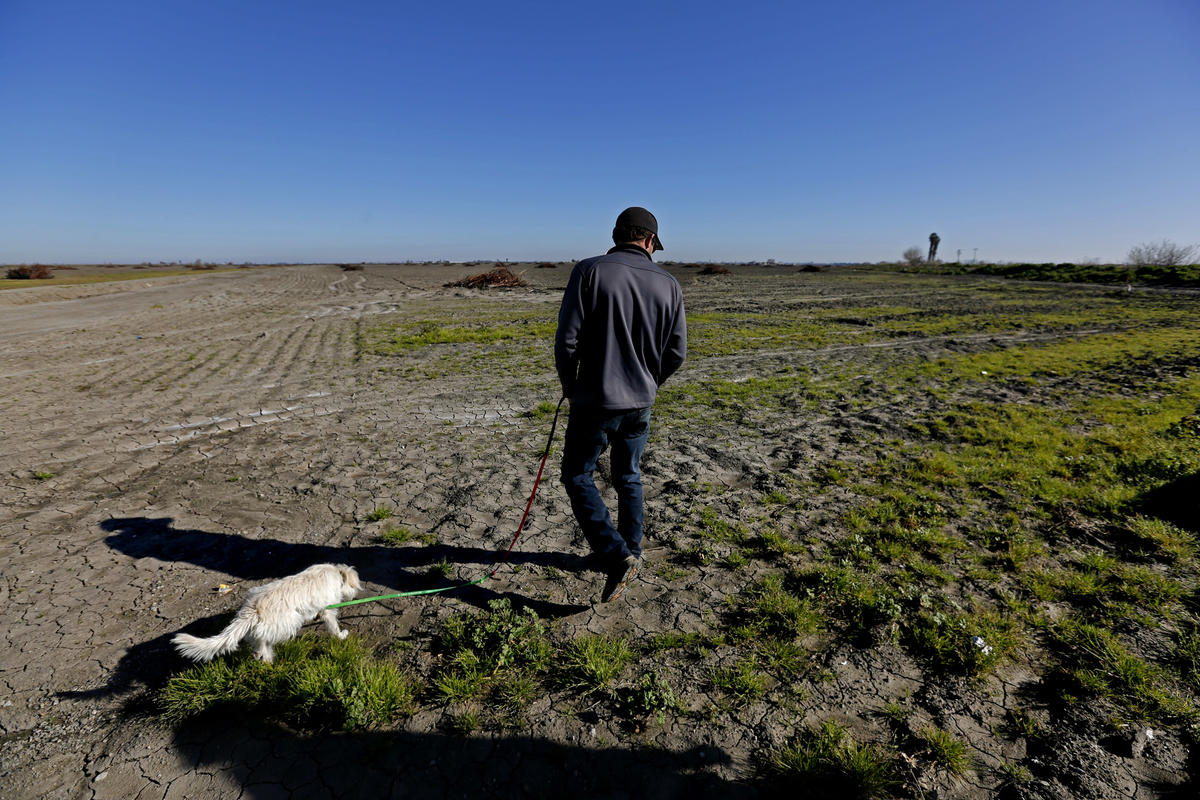 “I try to make any decision I make not emotional. When you’re running a business, it has to be a financial decision,” he says, sifting through the mangled metal posts.

Five years ago, Klein had a crew of 100 workers pruning, tying and suckering his grapevines. Wineries paid $700 for a ton of grapes, and Klein could make a solid profit paying $8 an hour, the minimum wage.

Last year he could barely get together 45 laborers, and his grapes sold for only $350 per ton. Klein knew his vines were done for when California passed laws raising the minimum wage to $15 by 2023 and requiring overtime for field laborers.

“There’s not enough guys, and everybody is fighting for everybody else’s guys,” he says. “In Napa and Sonoma, they’re getting $2,000 a ton [for grapes]. So, those guys can afford to pay $15. For me, I’m just trying to break even.”

Although Trump earned Klein’s vote, he worries that recent executive orders ratcheting up deportation plans and calling for a wall are putting a chokehold on an already tight pool of workers.

Already, fewer Mexicans had been willing to risk border crossings as security and deportations escalated under the Obama Administration. At the same time, Mexico’s own economy was mushrooming, offering decent jobs for people who stayed behind.

With the grapevines he has left, Klein is doing what he can to pare his crews. Last year, he bought a leaf puller for $50,000, which turns the delicate process of culling grapevine canopies into an exercise in brute force. The puller hooks onto a tractor and, like an oddly shaped vacuum cleaner, sucks leaves from grapevines.

He used to spend $100 an acre culling the canopies, which allows the right amount of sunlight to hit the grapes and turn them into sugar balls. Now, he says, “It will cost me 20 bucks, and I can get rid of some labor.”

Klein says he’ll spend the next five years replacing his 1,000 acres of grapevines with almond and olive trees, which require a fraction of the human contact to grow.

About 80 miles west in Napa, growers aren’t facing quite the same challenge. Cabernet Sauvignon grapes in Napa go for nearly $6,900 per ton, 10 times more than in San Joaquin County.

Here in Virginia, this is one of my neighbor’s Tomato Fields. This one is run by a major company, and the crop can wind up in anything from your Marinara and Spaghetti Sauces under a major label, to canned tomatoes, depending on what they plant. There are about 300,000 to 3 million plants out there on this field (of which the photo is only of a small part). All of these tomatoes are picked by hand by immigrant labor. Teams of hundreds go out to pick the crop, twice, before the plants are killed, and a second crop is planted. Typically they get two crops a year in Spring to fall. If the Chumph deports these workers…There ain’t gonna be any Mamma Ragu anymore. 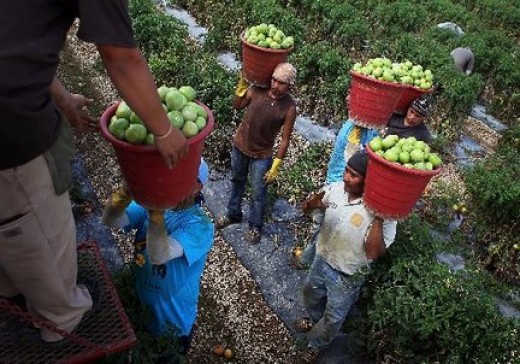