All Stories in the Bible Were About White People

Actually many of the people in the Bible, excluding Romans…Were Jewish…

And Romans could be any color as race hadn’t been invented yet, and wouldn’t be for another 1300 years.

And even from a racist’s view of the Bible…There are the children of Ham.

The European invention of the “Last Supper”

Racist Black History Month essay shocks school: ‘All stories in the Bible are about white people’

A Catholic high school in Louisiana has apologized “to anyone who was offended” after a racist essay about Black History Month went viral.

WBRZ reported that St. Michael the Archangel in Baton Rouge explained in a letter to parents that an essay making the rounds on the internet was “contrary to the teachings of the church.”

According to WBRZ, the essay was written by a white student who said she was “unpleased” by the Black History Month assignment.

“I’m not fully racist but I hate almost every black person,” the essay begins. “They think they run everything but in reality are an embarrassment to this country.”

The student goes on to justify slavery based on misconceptions about the Bible.

“Think about it though,” she writes. “None of the apostles were different ethics [sic]. They were all white. There was [sic] no black nor Hispanic [sic] mentioned really back when Jesus time was. All the stories we hear in the Bible are about like mainly white people. So since God knows everything that is going to happen than [sic] he would have done something about that.”

The student explains that she cannot support Dr. Martin Luther King Jr.’s message about equality because black people make her “petrified to leave my house.”

“But we are supposed to give them a month right?” the essay continues. “When they cannot even wear pants that fit them? When they shoot cops for protecting people?”

“Sad to say this but maybe things would be better if they would have stayed slaves,” the student concludes. “I should not have to be scared for my life when I see them in my sight.”

In a letter to parents, school officials said they “apologize to anyone who was offended by this writing.”

“The ideas and the writings of this student, and their subsequent posting on the web, were not within the school’s control,” the letter stated. “We look at this incident as a teachable moment and as an opportunity for education and growth for all involved, particularly through reflection on the wisdom of our Catholic faith.”

And then there is the problem of the Black Madonna, which are the oldest surviving depictions of Jesus’s Mother Mary…The very first and the oldest portraits of Mary, the mother of Jesus are images of a BLACK WOMAN known universally as the BLACK MADONNA. 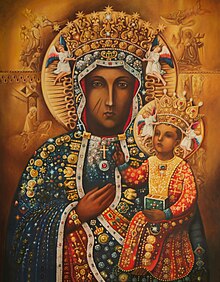