Whoever the dumb arsed Democrat Strategist was who came up with idea of trying to appeal to Republicans need to be permanently retired to an Arctic Island.

The Campaign to call Democrat legislators and complain about their chickshit cowardice has apparently succeeded, At least 1.5 million people called every day last week.

Can you say Uprising?

There are a lot of pissed-off people in this country right now – specifically pissed off at the Chumph and Republicans. Indeed, they are increasingly in numbers utterly belling any contention that Chumph had the numbers of voters the machines supposedly counted. 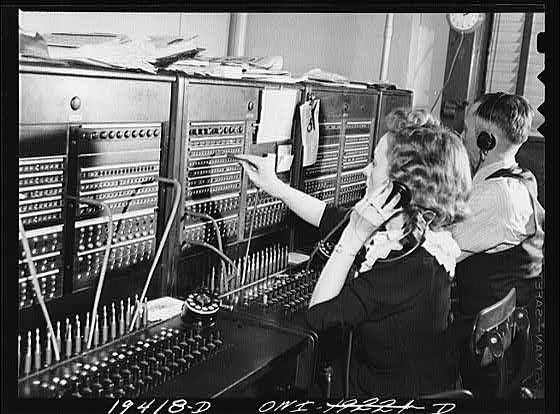 President Donald Trump uses the tools of the 21st century to express his views, demonstrating a singular ability to rivet the nation with little more than a series of late-night tweets. His opponents, on the other hand, have recently rallied around a communications tool that dates to the 19th century: the congressional telephone exchange.

Much of the recent traffic jamming congressional phone lines has been directed against Betsy DeVos, Trump’s nominee to serve as Secretary of Education. Her support for school choice and voucher programs has made her a target for teachers unions and public education advocates. Sen. Lisa Murkowski, an Alaska Republican, has said she plans to vote again against DeVos in a confirmation vote scheduled for Tuesday after receiving “thousands” of calls from constituents. Another Republican, Sen. Susan Collins of Maine, also plans to oppose DeVos.

The communications network handling millions of calls dates back to 1897, when the Senate first adopted the telephone. The House installed its own exchange the following year. For decades, however, expensive long distance phone rates and cheap postage meant the congressional phone system was a minor player in people power. The phone lines were left primarily for conducting government business, not for fielding calls about Cabinet nominees and executive orders.

The game changed when activists started using 800 numbers to direct calls on single issues in the 1980s. The combination of toll-free calls and constituent organizing led to an avalanche of phone calls. An oral history of the Capitol Exchange, as the phone service is known, was conducted in 2006 by the Senate Historical Office. By that time, the Senate’s phone system was handling as much traffic as a rural telephone co-op, “We operate basically a small telephone company,” a Capitol Exchange manager told Senate Historian Donald Ritchie.

There’s a good reason for all the telephone traffic, said Emily Ellsworth, a former congressional staffer who wrote an online guide under the title Call the Halls. Emails can be answered by computer algorithm, and social media posts are easily brushed off, writes Ellsworth, but a ringing phone is hard to ignore.

Calls from actual constituents carry the most weight, though offices are also often flooded with robocalls. Nonprofit and advocacy groups offer options where their supporters can be automatically connected to the phone number of a local representative. In some cases, a robotic message advocating for that group plays before the supporter gets on the phone.

Concerned citizens are also turning to even more antiquated technologies, from congressional fax machines to pizza delivery guys. The digital service FaxZero has enjoyed a moment of popularity because it allows free faxing to numbers in the U.S. “People have told me they don’t like talking on the phone, or they feel email is too easily ignored,” said Kevin Savetz, who owns FaxZero. “Some want to reach out with every method possible.”

Elected officials are listening – or counting, at any rate. Sen. Diane Feinstein, the California Democrat, said her office received 55,000 phone calls urging her to reject Jeff Sessions appointment to attorney general. A spokesman for Sen. Patty Murray told Bloomberg News that the Washington Democrat has received over 50,000 calls and letters on the DeVos nomination.

There is no official count of the call volume, at least not one that can be publicly revealed. “As a matter of practice, we do not release statistics on the number of calls,” said Becky Daughtery, protocol officer for the Senate Sergeant at Arms, the office that handles many of the Senate’s administrative services. Daugherty wouldn’t say much else about the phone system, either, besides confirming that it serves both bodies of congress and operates around the clock.

That includes blizzards and terrorist attacks, according to the oral history of the congressional phone lines. The switchboard staff was sent home following the terrorist attacks on September 11th, then called back to the office to set up a conference call for the entire Senate. Although the oral history doesn’t collect statistics, the interview subjects cite school prayer, occasional budget appropriations debates, and President Bill Clinton’s impeachment trial as telephone-heavy issues. The hearings to confirm Clarence Thomas as a Supreme Court justice marked the busiest time in the switchboard’s pre-2006 history.

For Republicans who spent much of the last eight years dreaming up new ways to oppose the Obama administration, the political game of telephone is old hat. The phone system has even become at prop for political theater. When outrage over Obamacare was at its peak, former House Speaker John Boehner invited television cameras into a room on the fourth floor of the Capitol Building. Michael Steel, Boehner’s press secretary at the time and now a managing director at Hamilton Place Strategies, recalls that as many as 10 staffers – from fresh-faced interns to Boehner’s chief of staff – would sit answering phones.

Not all phone calls are equal, though. “Right now, you’re seeing a lot of robocalls where an activist group can send 100 calls and spam an office,” said Ellsworth, who worked for two Republican congressmen in Utah from 2009 to 2014. “A large volume of calls from outside the state tend to discredit everyone who calls from outside the area code. I could tell if they couldn’t pronounce my boss’s name correctly,” she said. “We’re not that stupid.”

Posted by btx3 on February 6, 2017 in Second American Revolution