Atlanta institution and controversial “Bishop” Eddie Long is dead at 63.

In a statement, the church said: “Bishop Long was known as one of the most influential faith leaders in the world. He stood strong as a Kingdom Builder, pioneering leader, and revolutionary mind changer. Long was a family man and spiritual leader who was well respected and loved for his passion to unapologetically and courageously preach the gospel of Jesus Christ.”

The bishop was well-regarded in Lithonia, just outside Atlanta in DeKalb County, home to one of the most affluent African-American communities in the U.S. Long has been the senior bishop of New Birth Missionary Baptist Church for nearly 30 years.

WGCL reports he grew the congregation from 300 when he started to more than 25,000 today. Along the way he built an international televangelist empire that included athletes, entertainers and politicians.

Long’s wife, Vanessa Long, filed for divorce in 2011 after a string of sexual infidelity allegations involving young men. She stayed legally married to Long, however, and released a statement marking his passing.

“I am confidant through my belief in God that my husband is now resting in a better place.  Although, his transition leaves a void for those of us who loved him dearly, we can celebrate and be happy for him, knowing he’s at peace,” Vanessa Long said.

Long, who has been an outspoken opponent of gay marriage, built his empire with charisma and a prosperity Gospel message that told followers God would reward the faithful with wealth. It was an idea he embodied, sporting jewels on stage, living in a mansion and driving a luxury car.

In 2011, Long settled a case involving allegations of sex between him and four teenage boys. The four young men accused him of using his power to influence them into sexual relationships with him.

Long’s first wife, Dabara S. Houston, claimed the pastor physically abused her when she was seven-and-a-half months pregnant with their only child.

Long has also been accused by former member of misusing and losing retirement funds. 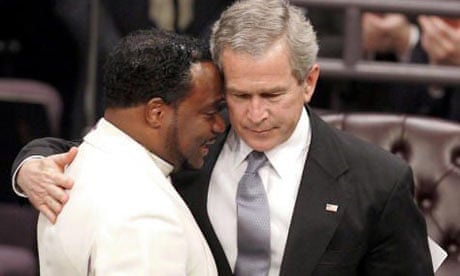 Posted by btx3 on January 15, 2017 in Black Conservatives, Giant Negros