The Chumph campaign in shopping this picture…

Not sure how the Chumph got to stand next to such an exceptional group of folks, other than having donated the banquest speck and being caught in mid stride trying to feel up Anita Bryant.(Looks like Ali is intentionally blocking his move).

But this was not, as the Chumph’s campaign has claimed a NAACP event.

No, Donald Trump Did Not Win A Medal From The NAACP

A photograph of Donald Trump, Muhammad Ali and Rosa Parks that the founder of Trump’s “diversity coalition” hailed as evidence the Republican nominee won an “NAACP medal” for “helping America’s inner cities” was actually taken at an awards ceremony organized by a business associate with an ethnic grievance.

William Fugazy, a politically well-connected businessman who later pleaded guilty to perjury, gave the awards to Trump and 79 other people, most of them white, to protest the awarding of “medals of liberty” to a group of 12 recent immigrants that included a Chinese-born architect, a Costa Rica-born astronaut, a leading expert on the psychology of race, and former Secretary of State Henry Kissinger, but no “Irish, Italian, or Polish” people. 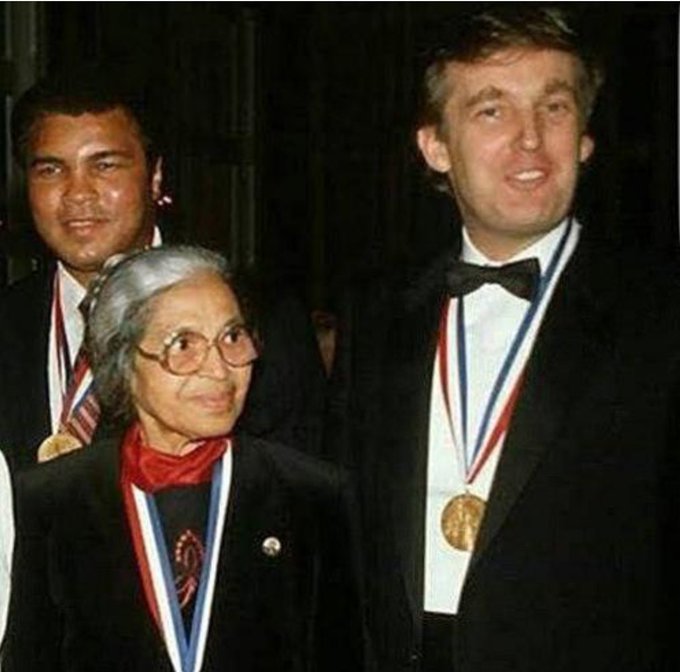 The NAACP has not awarded any medals to Trump for “helping America’s inner cities,” the group told HuffPost. Nor have any other civil rights groups, according to Trump’s biographers.

Here’s the real story. In 1986, as preparations began for the centennial of the Statue of Liberty, a civic committee selected a group of 12 naturalized citizens to receive “medals of liberty” from President Ronald Reagan. The final list, announced that March, included composer Irving Berlin, who emigrated from Russia; Franklin Chang Diaz, an astronaut from Costa Rica; I.M. Pei, an architect born in China; and entertainment legend Bob Hope, who was born in England.

There was an immediate outcry. Fugazy, then Trump’s real estate broker and head of the Coalition of Italo-American Associations, was angry that there were nonative-born citizens among the 12 liberty medal winners (which was inevitable, since the award was for naturalized citizens) and that the list excluded certain ethnicities, “like the Irish, Italians and Poles.”

Fugazy’s Coalition of Italo-American Associations helped lead the campaign against the selections. “We think it’s an insult to ― on the one hand ― ask for donations to restore the foremost international symbol of freedom for immigrants and ― on the other hand ― to exclude most of them from the Medal of Liberty list,” Joseph Martorana, the group’s executive director, told the Miami Herald, before claiming that “the ethnic groups excluded account for 76 percent of the nation’s population.”

Fugazy had plenty of support. New York Mayor Ed Koch, a Democrat, called the selections “idiotic” and announced plans to hand out his own awards.

Posted by btx3 on October 24, 2016 in BlackLivesMatter, Chumph Butt Kicking