The Chumph Campaigns for a “Revolution” When He Loses

Think it is time for Attorney General Loretta Lynch to sit the boy down and give him a good pimp slapping.

He is committing treason. And if his followers follow upon his campaign rhetoric… He should be spending the next 20 to life in one of those “private” Prison facilities learning the niceties from his 300 lb roommate TeyShaun. 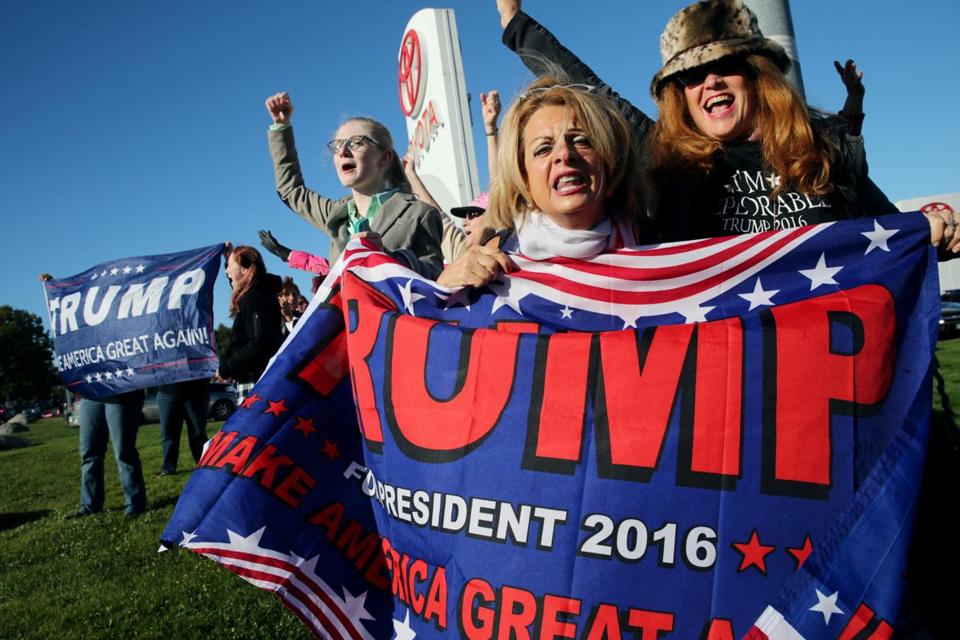 Bigots and Morons ‘R Us

In an arena normally reserved for ice hockey, the Donald Trump crowd was on edge.

Some wore shirts with slogans like “[Expletive] Your Feelings” or, in reference to the female Democratic nominee, “Trump that Bitch.” Others had buckets of popcorn, ready for the show. When the media entourage entered, thousands erupted in boos.

Anger and hostility were the most overwhelming sentiments at a Trump rally in Cincinnati last week, a deep sense of frustration, an us-versus-them mentality, and a belief that they are part of an unstoppable and underestimated movement. Unlike many in the country, however, these hard-core Trump followers do not believe the real estate mogul’s misfortunes are of his own making.

They believe what Trump has told them over and over, that this election is rigged, and if he loses, it will be because of a massive conspiracy to take him down.

At a time when trust in government is at a low point, Trump is actively stoking fears that a core tenet of American democracy is also in peril: that you can trust what happens at the ballot box.

His supporters here said they plan to go to their local precincts to look for illegal immigrants who may attempt to vote. They are worried that Democrats will load up buses of minorities and take them to vote several times in different areas of the city. They’ve heard rumors that boxes of Clinton votes are already waiting somewhere.

And if Trump doesn’t win, some are even openly talking about violent rebellion and assassination, as fantastical and unhinged as that may seem.

“If she’s in office, I hope we can start a coup. She should be in prison or shot. That’s how I feel about it,” Dan Bowman, a 50-year-old contractor, said of Hillary Clinton, the Democratic nominee. “We’re going to have a revolution and take them out of office if that’s what it takes. There’s going to be a lot of bloodshed. But that’s what it’s going to take. . . . I would do whatever I can for my country.”

He then placed a Trump mask on his face and posed for pictures.

Trump’s campaign has taken a sharp turn toward such dark warnings in recent days. He says he is a victim of conspiracies, portrays himself as a martyr to the cause of the right wing, and is stoking anger in advance of what may be a defeat on Nov. 8.

Trump has suggested that the Secret Service protecting Clinton should be disarmed and “see what happens to her,” and that “Second Amendment people” could take matters into their own hands if she wins and appoints judges who support gun control. But his campaign disavowed some of the remarks of his supporters on Saturday after this article was posted online.

“We reject violence in any form and will not allow it to be a part of our campaign,” the Trump campaign said in a statement. “Those who hold unacceptable views do not represent the millions of Americans who are tired of the rigged Washington system that will make their voices heard at the ballot box on November 8.”

Trump’s campaign has been stamped with improbability ever since he announced his candidacy in June 2015. He captured the nomination with rhetoric appealing to the angriest voters in the conservative base.