The police apparently have arrested two suspects, although it isn’t clear whether they actually were involved in the shooting. 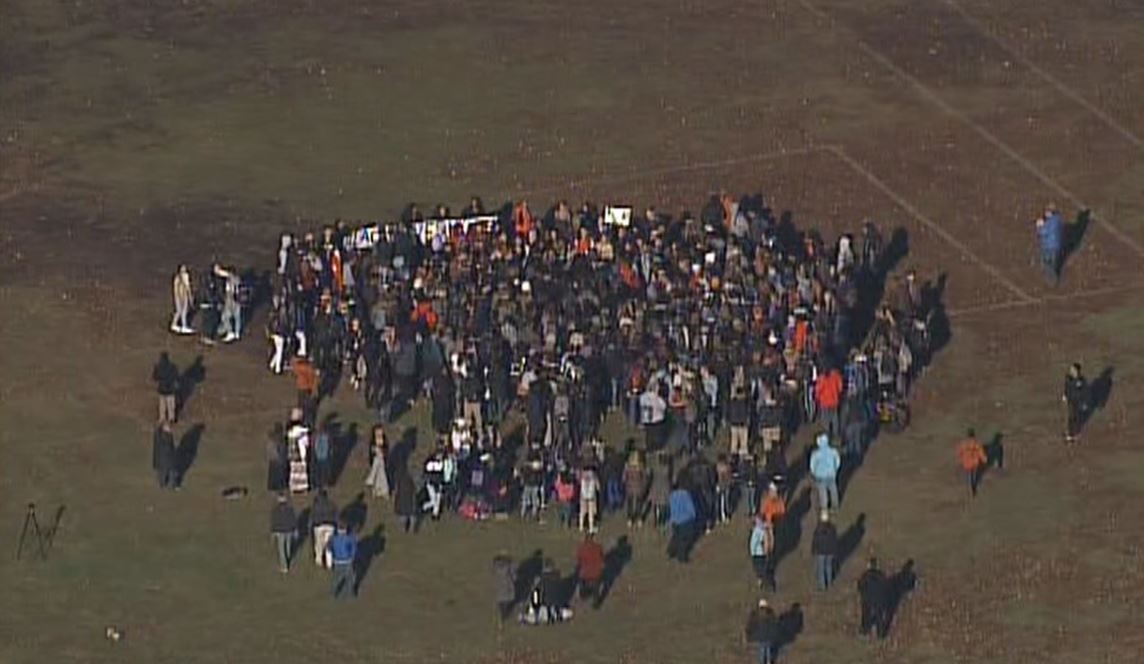 Minneapolis High School Students who had walked out to join march.

Minneapolis police said on Tuesday they have arrested a 23-year-old white man and a 32-year-old Hispanic man in relation to the shooting of five people near a city police station where demonstrators have gathered for more than a week to protest the killing of an unarmed black man by officers.

The police said the younger suspect was arrested around 11:20 a.m. local time (1720 GMT) in the Minneapolis suburb of Bloomington, while the older man was arrested in his vehicle about 45 minutes later in south Minneapolis.

“We are sparing no efforts to bring any and all those responsible to justice,” Minneapolis Mayor Betsy Hodges said after the first arrest. In an earlier video statement, she said she abhorred the attack on the demonstrators.

The police, however, have not yet confirmed a connection between the shooting and the protest. The police also said they will release the suspects’ names after charges are filed while the search for any additional suspects continues.

Police earlier said they were looking for three white male suspects in the shooting late on Monday. It occurred a block from the police station where protests have been held since the fatal Nov. 15 shooting of Jamar Clark, 24, Minneapolis police said in a statement.

None of the injuries in the Monday shooting were life-threatening and the wounded were taken to local hospitals.

The Black Lives Matter Minneapolis group protesting Clark’s killing said on its Facebook page that five unarmed protesters were shot by what it described as white supremacists who had been asked to leave the area and were followed out by protesters before they opened fire.

The men, described by some witnesses as white supremacists, wounded five demonstrators shortly before 11 p.m. outside the city’s Fourth Precinct during an ongoing protest of the police shooting death of 24-year-old Jamar Clark.

Demonstrators say masked men wearing military-style clothing have been harassing them for days during the protests, and Black Lives Matter Minneapolis posted a video Friday of two men on their way to disrupt the protests.

White supremacists have discussed various strategies online for sparking confrontation at the demonstration, which they described as a “chimpout.”

“Do you know if the BLM n*****s are planning to protest again tomorrow, and if so, at what time?” one white supremacist asked in an email chain.

They agreed to wear camouflage clothing and display a four of clubs to identify each other, and the white supremacist agitators argued over whether they should carry guns or wear Guy Fawkes masks.

The white supremacist mocked “social justice warriors” and other anti-racist whites, who they described in psychosexual terms.

“Best to act as much like a beta white cuck as much as you can,” one the racists said.

The activists said groups of men had been appearing at the demonstration and “acting shady” since Friday, so they put together a “safety committee” to watch for potential agitators and escort them away from the protests.

That’s apparently what happened just before the shooting, when some of the protesters confronted three men, described by witnesses as two white men and possibly one Asian man.

Witnesses say the gunmen were trying to record demonstrators’ faces on cell phone video shortly before opening fire, and the two groups argued.

Then a group of protesters charged at the men and demanded they remove their masks, but witnesses said the men shouted back, “f*ck no,” and continued recording cell phone video.

A demonstrator, who spoke on camera with a mask covering his face, said one of the men was carrying a Black Lives Matter sign.

Posted by btx3 on November 24, 2015 in BlackLivesMatter