The history of black education in America is difficult to separate from the legacy of the Rosenwald Schools. Julius Rosenwald, who rose to be President of Sears and Roebucks, charity built nearly 5,000 schools in the segregated South for black children. Black parents paid a “double tax” to get the schools built and operated in the 14 states of the South, as on top of their normal state and local taxes, they had to raise and donate about 14% of the cost of the school – which I will detail in the second article below. 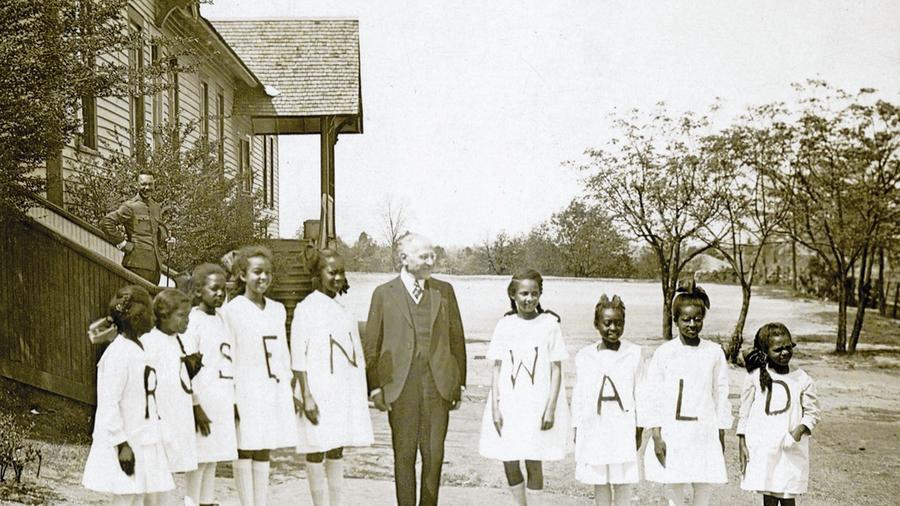 In age that exalts politicians and entertainers who can’t stop telling us how wonderful they are, it is refreshing to honor a man who accomplished a lot without wanting his name on all of it.

Julius Rosenwald, who never finished high school but rose to become president and co-owner of Sears, Roebuck and Co., didn’t want his name on the store that he led to worldwide success.

Rosenwald, who died in 1932, didn’t want his name on Chicago’s magnificent Museum of Science and Industry, although he funded and promoted it so much that many Chicagoans called it “the Rosenwald museum” anyway.

He didn’t want his name on his other edifices, including more than 5,000 schools that he helped fund for black schoolchildren across the segregated South.

Yet, alumni of those schools still call them “the Rosenwald schools.” I know. Some of those alumni are in my family.

I discovered that tidbit of family information in the way journalists often stumble across information about themselves while pursuing stories about somebody else.

I was being interviewed by Washington, D.C., filmmaker Aviva Kempner for her new documentary, “Rosenwald,” when she asked if any of my southern relatives, most of them in Alabama, attended Rosenwald schools. I didn’t know, I said, but it was possible. I have a lot of cousins.

I later asked my cousin Willie Howard, a whiz in the telecommunications industries, and he broke out in a big grin. “We all did,” he said.

Alumni more famous than my cousins include poet-author Maya Angelou, director George C. Wolfe, U.S. Rep. John Lewis of Georgia and Pulitzer Prize-winning Washington Post columnist Eugene Robinson, all of whom are interviewed in the film.

Indeed, Kempner’s “Rosenwald,” now in select theaters, may well leave you convinced that former United States poet laureate Rita Dove, another Rosenwald school alum, was right when she called the Rosenwald Fund “the single most important funding agency for African-American culture in the 20th century.”

The most intriguing question, among the many that the film explores, is why Rosenwald, whose father immigrated from Germany in 1851 with $20 in his pocket, was so modest yet so generous.

As the late civil rights leader Julian Bond, whose father and uncle were Rosenwald fellows, puts it in the film, “He did not have to care about black people, but he did.”

The answer, Rosenwald’s biographers say, can be found in his faithfulness to the Jewish ideals of “tzedakah” (charity) and “tikkun olam” (repairing the world).

According to Stephanie Deutsch, author of the 2011 book “You Need a Schoolhouse: Booker T. Washington, Julius Rosenwald and the Building of Schools for the Segregated South,” Rosenwald said in one of his speeches that “We like to look down on the Russians because of the way they treat the Jews, and yet we turn around, and the way we treat our African-Americans is not much better.”

Rosenwald was also influenced by Booker T. Washington, conservative founder of the Tuskegee Institute, who suggested the funding of schools as the best investment for the future of black America.…More…

The Rosenwald school building program, in many ways the brainchild of Virginia-born and Hampton-educated Booker T. Washington, occurred during the period of segregation and Jim Crow across the American South. Segregated school systems were supposed to be, according to the U.S. Supreme Court in Plessy v. Ferguson (1896), “separate and equal,” but in reality educational systems for African Americans in Virginia and the South were anything but. This made the funds provided by educational grant programs such as the Rosenwald Fund so significant.

The local activism surrounding Rosenwald schools continues today in movements throughout the Commonwealth to preserve the histories, and structures, of these schools. John Tyler Community College (and the Virginia Community College system) has been working on an initiative to increase student engagement and success using student and faculty involvement in Rosenwald school activities. The excitement and commitment surrounding this activism provides us with an opportunity to engage the younger generation in this history and in education in general. We have also partnered with Preservation Virginia (among others) to create a larger network of Rosenwald school information across the Commonwealth.