Another Day…Another confederate Flag Down

The most violent part of the Civil Rights battle to desegregate was in Danville, Virginia.The violence, and threats against Civil RIghts demonstrators were as severe as any in the deep South.

Danville was the last Capital of the soon to be defeated confederacy. Some things die hard. 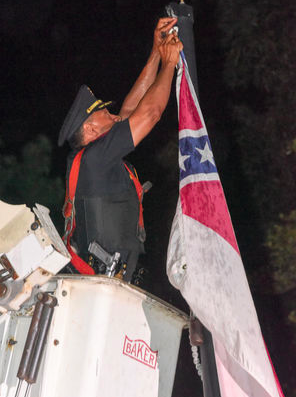 After 20 Years, Confederate Flag In ‘The Last Capitol Of The Confederacy’ Comes Down

The small town of Danville, Virginia has been locked in a contentious debate for several years over whether or not to remove a Confederate flag that flies in front of a city-owned historical museum. But late last Thursday night, the town’s city council officially voted to take down the rebel emblem, ending a 20-year stretch of waving the national flag of the Confederacy on public grounds.

According to GoDanRiver.com, the Danville city council voted 7-2 last week to remove the Third National flag of the Confederacy from the lawn of the Sutherlin Mansion, a historic building which houses a museum paid for with public funds. The flag was erected in 1995 on the house’s lawn to commemorate its historical significance — namely, that it hosted the last official meeting of the Confederate presidential cabinet, making it the “Last Capitol of the Confederacy.”

The council meeting — one of several that addressed the issue over the years — was packed with supporters and opponents of the flag. Representatives from both camps waved American and Confederate flags and offered rival speeches to officials, but the council ultimately voted for its removal and dispatched a police offer to take it down.

“The Confederate flag must come down. We must stand on the words, ‘We believe that all men are created equal,’” Rev. William Avon Keen, president of the Virginia Southern Christian Leadership Conference, said in an address to the council.

The town’s controversy over the Confederate flag has raged for decades, but not necessarily because of local support to keep it flying. Rather, city council officials have long been frustrated by an odd legal conundrum: Local Confederate heritage groups argue that the flagpole constitutes a memorial to veterans, which would make it protected by an obscure section of Virginia law. Thus, when officials voted last November over whether to remove the ensign, the city council argued that “under Virginia law it does not have the legal authority to remove the Confederate flag.”

But that all changed last week, when Virginia Attorney General Mark Herring sent a letter to the city council directly addressing the issue. In an official opinion, Herring argued that Danville officials could remove the flagpole because it only recognizes the “historical significance” of the museum building, and thus doesn’t constitute a memorial to veterans.

here were some who were upset about the decision, however. As crowds gathered near the museum to watch the flag come down at around 9:00pm, several of the banner’s supporters shouted in anger as police removed it with the help of a crane. Meanwhile, the local chapter of the Sons of Confederate Veterans has vowed to sue the city, arguing that the Attorney General’s opinion is only an opinion — not law. Local heritage groups also responded to the vote by putting up a large Confederate battle flags in various sections of the city over the weekend — but this time on private property.

Yet local news stations noted that some of the representatives who spoke in favor of the flag at the city council meeting were not from Danville, but from just over the state line in North Carolina. That area known to house a chapter of the Ku Klux Klan that staged a rally at the South Carolina State House last month in support of the Confederate flag.