The NRA has a new target – Oakland, California. Unfortunately for the NRA, this one isn’t as easy as Colorado.

A new study of gun violence published by the American Journal of Public Health found that states with greater levels of gun ownership tend to have higher rates of gun-related murder.

The study, conducted by Boston University professor Michael Siegel and coauthors Craig S. Ross and Charles King III, examines this relationship in all 50 states from 1981 to 2010. The researchers found that “for each percentage point increase in gun ownership, the firearm homicide rate increased by 0.9 percent.”

The authors note that, though they can’t prove a causal relationship between higher levels of gun ownership and homicide, “states with higher rates of gun ownership had disproportionately large numbers of deaths from firearm-related homicides.”

According to a fact sheet from the Harvard School of Public Health:

Our review of the academic literature found that a broad array of evidence indicates that gun availability is a risk factor for homicide, both in the United States and across high-income countries. Case-control studies, ecological time-series and cross-sectional studies indicate that in homes, cities, states and regions in the US, where there are more guns, both men and women are at higher risk for homicide, particularly firearm homicide.

Gun Control in the US, may well break down into Urban versus Rural laws – based on the reality that cities tend to have more violent crime. To make this work may take some creative thinking, beyond just the knee-jerk reaction of either side of the argument. Control of guns has a long history in the US, where it wasn’t uncommon for the local Sheriff to confiscate guns within the city limits to protect the relative peace of the community.

Perhaps, instead of some sort of outright ban – that could be a solution for cities. Regulated, privately owned arsenals operating at the city limit, which would keep or store firearms for city residents or visitors until they leave the urban confines of city. It isn’t clear at this point whether this type of nuanced approach is acceptable to either side.

It will be interesting to see where this one goes, as if it is successful – it may be a model for other cities. 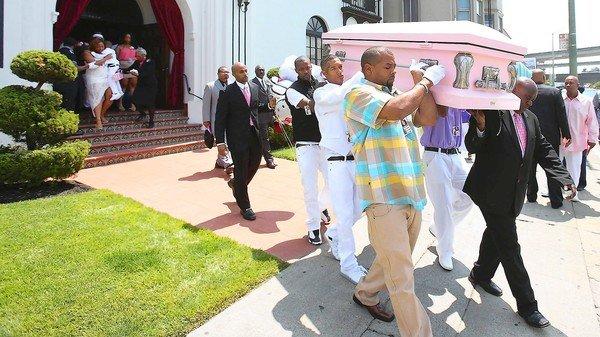 Pallbearers carry the casket of Alaysha Carradine, 8, who was shot to death at a slumber party in Oakland in July. A 7-year-old girl and a 4-year-old boy were wounded. Last year, 12 children were among the city’s 130 homicides — 90% of them gun-related.

City seeks exemption from the California law that bars local governments from regulating the registration or licensing of firearms.

As a City Council member here, Libby Schaaf is notified each time someone is shot. That, it turns out, occurs several times each day.

It is a relentless reminder of Oakland’s sweeping public safety crisis: So far this year there have been 3,026 gun crimes in this city just shy of 400,000 residents, which tops the list of the state’s most dangerous.

Extreme conditions, reasoned Schaaf — among the public officials who recently attended the wrenching funeral of an 8-year-old girl strafed with gunfire at a slumber party — require exceptional measures.

And so was born an unprecedented effort to seek an exemption from the California law that bars local governments from regulating the registration or licensing of firearms.

“Since the moment I came into office I’ve been on a quest to understand … the tools that Oakland could use to reduce the bloodshed in any way,” said Schaaf, who tapped academics in criminology and law for ideas.

The legislation sponsored by Assemblyman Rob Bonta (D-Oakland) has passed both legislative chambers and is sitting on the desk of Gov. Jerry Brown, an Oakland resident and two-term mayor here. It joins a dozen other gun control measures awaiting the governor’s decision, including bills that would outlaw the sale of rifles with detachable magazines, expand the list of crimes that result in a possession ban and crack down on straw purchasers of firearms.

No municipality has previously received such an exemption, yet Bonta called the “targeted approach” to hand this regulatory decision-making to local officials “good policy,” noting that 12 children were among Oakland’s 130 homicides last year — 90% of them gun-related.

This year has also seen the slaying of several children, among them Alaysha Carradine. Known to her family as “Ladybug,” she was slain at a July slumber party when an unknown suspect knocked on the door and opened fire. A 7-year-old girl and 4-year-old boy were wounded.

California does not require registration per se but rather a “dealer record of sale,” provided to the state Department of Justice at the point of purchase. That data can quickly become out of date.

“The bill does nothing useful and is just going to make it more difficult for poor people in Oakland to defend themselves and their families,” said Brandon Combs, president of the California Assn. of Federal Firearms Licensees, which lodged its formal opposition to the bill.

But some experts say Oakland could prove a worthy test case for local control for larger cities, such as Los Angeles, which tend to face the greatest crime concentrations. Home rule, they note, allows faster local access to better data in high-crime areas without imposing the same controls on rural areas, which would likely fight them most and arguably need them least.

“It doesn’t isolate the big cities in California, it isolates one city in California,” said UC Berkeley law professor and criminologist Franklin Zimring. “It says, ‘OK, Oakland, you’ve got a big problem now, let’s see what you want to add to the existing California policy that responds to the nature of firearms violence Oakland-style.'”

The Oakland experiment, Zimring said, could serve to “test the waters of local control and to see whether the political process that produces city-level gun policy can get inclusive and responsible, and whether it can get specific and selective in ways that can solve the problem.”…

Posted by btx3 on September 14, 2013 in American Genocide