Obama and the Dead Elephant

What took so long to figure this isht out? Now that President Obama is facing an election where the Rethuglys and whackjobs just might win a majority in the House (if you believe the hype)…

He’s just discovering he can’t negotiate with these scumbags?

Everyone and their brother told you, President Obama to kick the scumbags in the nuts on day 1. Unfortunately…

That’s the only way top get their undivided attention. 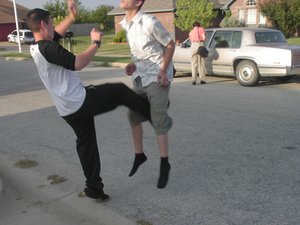 The proper way to get cooperation and comity from Republican leadership.

Obama: I Can Work with Republicans, but Not GOP Leadership

President Obama said today that he is at odds with Republican leadership in Congress — but not necessarily Republican voters.

There are conservative and Republican voters that may disagree with some of his policies but have “basically recognized we’ve got to solve some big problems,” Mr. Obama said on NBC’s “Today Show.”

Yet while regular Republicans may be willing to work together to achieve solutions, the president said that Republican leaders are instead putting forward “a set of policies that are just irresponsible.”

“They say they want to balance the budget, [and] they propose $4 trillion in tax cuts,” Mr. Obama said. “That’s not a serious approach.”

Posted by btx3 on September 27, 2010 in Stupid Democrat Tricks