Obama Ahead With Muslims, Jews, Catholics, and Agnostics

I would think his polling among Protestants (43%) breaks on what type of Church.

24% Approval among Mormons? What are you guys smoking?

The amazing part of all of this is… Remember the Reverend Jeremiah Wright controversy during the election?

Indeed, here is an article from one of the “faithful” arguing that Obama isn’t a Christian… Because he isn’t their kind of christian. 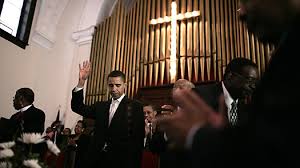 More than three-quarters of U.S. Muslims support President Obama, according to a new Gallup Poll.

Obama scored the lowest approval ratings among Mormons, 24 percent. He received 63 percent support from the non-religious, atheists and agnostics.

A recent Pew poll found that one in five Americans mistakenly believe Obama is a Muslim. He is a Protestant Christian.

Posted by btx3 on September 2, 2010 in Domestic terrorism