RSS
← Jamaica – Fighting In the Streets
Uhhhhh… About That “Tea” →

Patrick is not the first one to say this. Some Republicans are attempting to break the US Government such that it will fail. In particular, some of the the Tea Baggers, especially Beck and his cohorts are seeking to foment violent revolution. I don’t feel “almost” is an apt description…

Patrick says Obama critics are ‘almost at the level of sedition’ 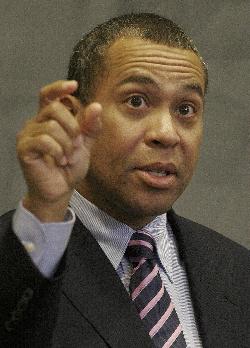 Governor Deval Patrick, even as he decried partisanship in Washington, said today that Republican opposition to President Obama’s agenda has become so obstinate that it “is almost at the level of sedition.”

The Democratic governor, who is close to the president, made the comments at a forum at Suffolk Law School’s Rappaport Center, where he was asked by an audience member about partisan battling in Congress.

Patrick said that even “on my worst day, when I’m most frustrated about folks who seem to rooting for failure,” he doesn’t face anything like the opposition faced by the president.

“It seems like child’s play compared to what is going on in Washington, where it is almost at the level of sedition, it feels to like me,” Patrick said.

Merriam-Webster.com, the dictionary site, defines sedition as “incitement of resistance to or insurrection against lawful authority.”

← Jamaica – Fighting In the Streets
Uhhhhh… About That “Tea” →