Whatever Happened to “Two All Beef Patties”?

After fights over burqas and Muslim-rights and France’s national identity, French politicians are taking on the burger. Because it’s a symbol of American imperialism? Mais non! A French fast-food chain is dishing up a pork-free halal sandwich. 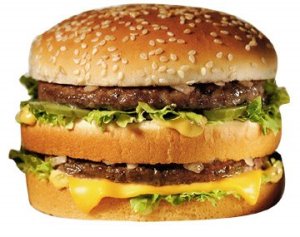 Now I don’t know about you, but I always think of the French contribution to fast-fat-fare as being the fried sliced spuds. Those ubiquitous semi-indestructible gastronomic treats often found fossilized betwixt the back seat cushions of 1960’s era American Cars when you pull the seats out to restore them…

But PORK in a HAMBURGER?

Something definitely got lost in this translation.

The “offending” Quick outlets (three are in Paris suburbs) are located in predominantly Muslim neighborhoods, in an apparent concession to a $1.3 billion halal (meaning ‘legal’ under Islamic law) food industry. While French Muslims didn’t ask for pork-free fast-food at Quick, they are appreciative of them, if sales are a sign.

Yet in a French election year where the burqa, or full length Muslim veil, is portrayed as a non-French symbol – the inalienable right to order a bacon burger is a new battleground.

The battle cry is not yet iberté, égalité, fraternité et porc! – one French mayor, the secretary general of the ruling political party, a government spokesperson, and Marine Le Pen, vice president of the anti-immigrant National Front, are all seeking to make the eight halal Quicks an example of the adulteration of French identity and principles ahead of March 14 regional elections.

A pork-less Quick – similiar to a kosher McDonald’s or Burger King – means those who take both their kids and the Koran seriously can go to a popular fast food restaurant and not have to order only the fish.

Still, to many Frenchmen, a halal Quick seems odd and perhaps not quite right in a society where religion should not stand out in ordinary life, under the strictly secular principles of laicite, or separation of church and state. As with the burqa question, support for secular France are found on the socialist left and strongly on the right, as well.

Outside the eight Quick restaurants are signs that say, “No Strong Bacon Burger,” a reference to a popular sandwich on the menu. The signs and the halal experiment date to last November, in a chain that is France’s homegrown rival to the Golden Arches.

The hamburger becomes the new Burkini!

I guess we won’t be seeing falafel burgers in France either.