Note to Tiger – when you are rich and famous, there is no such thing as ONE Bimbo eruption…

A second woman has stepped into the spotlight in the Tiger Woods controversy – and this one whole-heartedly claims that she and the champion golfer had an affair. 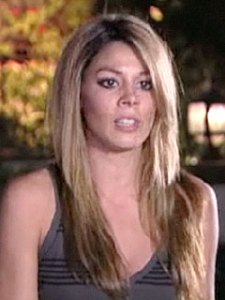 Jamie Grubbs, a cocktail waitress who appeared on the VH1 show Tool Academy, tells the British tabloid the Sun that she and the pro golfer had a 31-month fling that included around 20 sexual encounters, the first just days before Woods’s wife, Elin Nordegren, gave birth to the married couple’s first child.

“He told me just last month, ‘Quietly and secretly we will always be together,’ ” Grubbs, 24, says.

According to Grubbs, the two met in Las Vegas in 2007, and Woods, 33, flew to see her in San Diego every few months thereafter. She says she still has text messages and voicemails to prove the relationship – including one in which he asks her to take her name off her cell-phone ID because Nordegren was starting to become suspicious.

“Just have it as a number on the voicemail. You got to do this for me. Huge. Quickly. Bye.”

Second Note to Tiger – You are married to one of the most beautiful women in the world. There is no shortage of beautiful women who will trade their favor for an association with fame and wealth…

Don’t go downhill. This one is like “three putting” after hitting 4 Eagles in a row.