More racism from conservatives, this time in an effort which could result in the removal of mention of Thurgood Marshall and Cesar Chavez from the history books utilized not only in Texas – but in schools throughout the country… 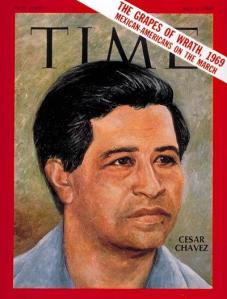 The Texas State Board of Education is moving toward removing Cesar Chavez and Thurgood Marshall from the social studies curriculum taught to its 4.7 million public school students. According to one of the six “expert reviewers” revising the 1997 curriculum, Chavez “lacks the stature, impact and overall contributions of so many others; and his open affiliation with Saul Alinsky’s movements certainly makes dubious that he is praiseworthy.” Another reviewer concluded that Marshall, a Supreme Court justice who as an attorney argued the landmark Brown vs. Board of Education case, is “not an appropriate example as a historical figure of influence.” These are not the rantings of powerless and fringe people; they are statements from those recommending a new curriculum to the full Board. And so during a week in which an African-American President’s appointee of the first Latino to the Supreme Court dominates the news, we have Texas – whose Governor spoke of “secession” earlier this year – trying to turn back social and racial progress.

Texas has an elected 15-member Board of Education, seven of which are viewed as social conservatives. The Board’s panel of experts to recommend new curriculum standards reflects this conservative perspective, which could soon result in a social studies classroom in which Cesar Chavez and Thurgood Marshall are ignored but the motivational role of the Bible in the nation’s founding is highlighted.

So how does this impact schools outside of Texas? I mean – if the folks in Texas want to remain ignorant, it’s their own damn fault…

Well, because Texas is the second largest purchaser of textbooks behind California, textbook publishers try and contain costs by publishing only one version. As such, the Texas creationist and historically absent textbooks would be circulated to other states.

So… Why don’t conservatives want Chavez mentioned in the history books (I mean besides the obvious racism)?

Although Cesar Chavez advocated for Texas farmworkers, conservative opposition to him in the state is primarily linked to Chavez getting his start as an organizer with the Community Services Organization, which was affiliated with Saul Alinsky’s Industrial Areas Foundation. The Texas IAF has been extremely successful over the years, and its COPS/Metro Alliance in San Antonio has often been hailed as model for enlisting Latino participation in the democratic process.

But many conservatives don’t want Latinos attending public hearings or voting. This is particularly true in Texas, where increased Latino voting could soon swing the once solidly red state to blue.

And we don’t even need to explain why Texas conservatives don’t want Thurgood Marshall, a black man – who won the seminal Brown v. Board of Education of Topeka case which was the pivotal crack in the system of legal segregation.